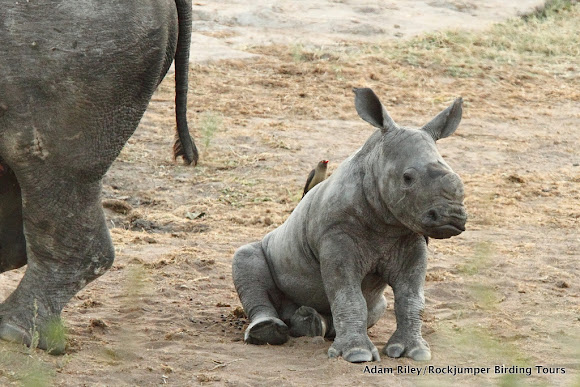 The White Rhino was nearly extinct 100 years ago, numbers have recovered somewhat (but still to a fraction of original populations) however once again they are under intense threat from poaching for horns, even in well protected parks such as Kruger National Park. This young animal was taking a rest while his mother was drinking. Note the Red-billed Oxpecker on his back!

A group of rhinos is called a crash.

what a really lovely baby rhino! Love this one!

Congrats Adam, your adorable rhino calf is the star of our Facebook caption contest! https://www.facebook.com/photo.php?fbid=...

To this little baby Rhino: Happy World Rhino Day! Please know that there are humans out there trying to save your kind!

man these babies are so cute! thanks for joining mission Adam!

Love the bird sitting on (or behind) the baby. Adorable spotting and photo

What a lovely baby!

Thanks for the great comments everyone, baby rhinos really are cute!

omg this so incredible cute!

Lovely photo Adam! I was surprised at how non-aggressive & easy to approach the white rhino were - compared to their cousin the black rhino!
Please can you add this to the Symbiotic Relationships mission?