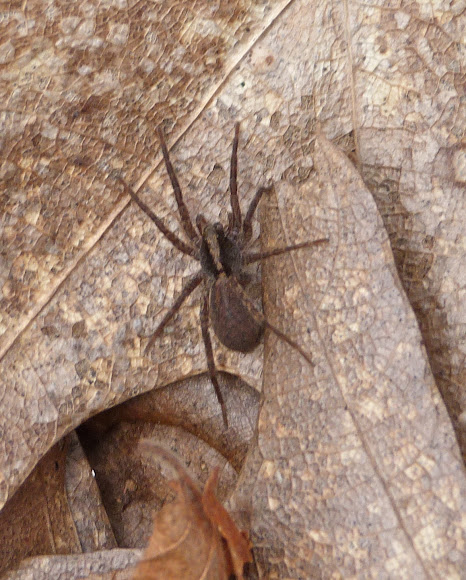 A common and widespread spider in North America, Pardosa milvina can be found in the United States from New England to Florida and west to the Rocky Mountains. This wolf spider can be found in grasslands, dry open woods and also in wet grounds along streams and ponds. This spider does not create a snare or web. Rather, it is somewhat nomadic, resting under rocks and grass in between hunting. The genus Pardosa is large, and it can be difficult to differentiate between species in this genus. In fact, only an expert can reliably tell members of the genus from one another. P. milvina does exhibit certain traits that distinguish it from other wolf spiders. The legs are long and thin with extremely long spines. Scopulae are claw tufts on spiders' legs that aid them in gripping during locomotion. This spider does not possess scopulae and therefore cannot climb smooth surfaces. The cephalothorax is highest in the head region, or carapace. Chelicerae are much smaller than in other wolf spiders, measuring 4 to 9.5 mm. The dorsal stripes common to wolf spiders are more wavy than in other species. The abdomen has yellow spots. Sexual dimorphism exists in this species. The males have white hairs on the patella of the legs. These spiders are considered small. The length of females ranges from 5.1 to 6.4 mm and male length ranges from 4.3 to 5.0 mm.