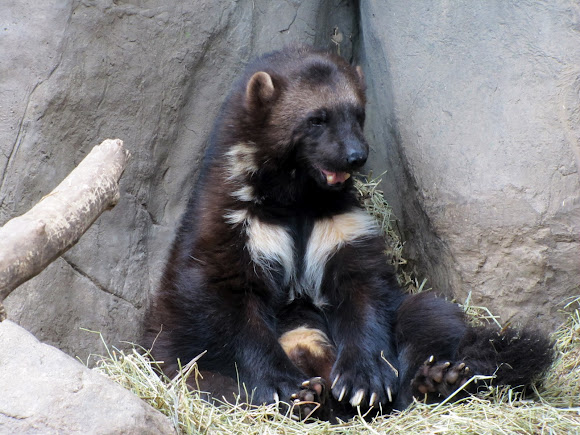 The wolverine is the largest land-dwelling species of the family Mustelidae (weasels). It is a stocky and muscular carnivore, more closely resembling a small bear than other mustelids. The wolverine has a reputation for ferocity and strength out of proportion to its size, with the documented ability to kill prey many times its size.

The wolverine can be found primarily in remote reaches of the Northern boreal forests and subarctic and alpine tundra of the Northern hemisphere, with the greatest numbers in the U.S. state of Alaska, northern Canada, the Nordic countries of Europe, and throughout western Russia and Siberia.

Around a hundred wolverines are held in zoos across North America and Europe, and they have been successfully bred in captivity, but only with difficulty and high infant mortality. This wolverine is in the Minnesota Zoo.

Great pictures!
These are fantastic animals, in Norway we only have around 360 animals in the wild..