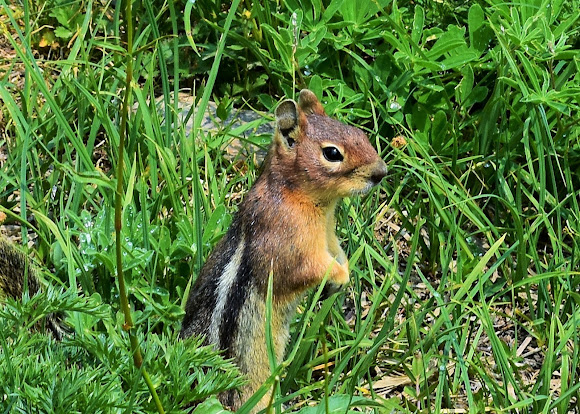 This species is distinguished from similar ground squirrels by a black-bordered white stripe down each side of the back. They are reddish brown on the shoulders, neck and head. They also have a white eye ring and no facial stripes and generally about 23 to 29 cm (9.1 to 11.4 in) in length. Pic 4 shows a juvenile that emerged from the rocks and is somewhat lighter in color. In pic 5 I was taking pictures of a marmot when one of the ground squirrels decided it should be in the picture to.

Spotted along the the Skyline trail above Paradise at Mount Rainier. About 7500 ft. and above most of the tree lines - with some patchy alpine trees around, but for the most part it is grassy meadows and boulders.

It is omnivorous, feeding on pine nuts, acorns, herbs and shrubs, fungi, many kinds of insects, eggs, young birds, lizards, carrion, and human foods when available.This species caches food near its burrow, especially during the late summer and fall.

Thanks for commenting Lauren. For the most part they live in the subalpine zone but they do expand there foraging to put on weight in the summer before their lengthy hibernation.

Very cute little animal, it must hibernate all winter at that altitude?