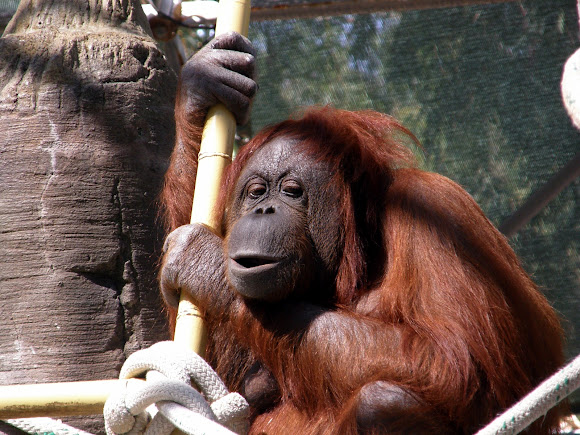 Orangutans are the only exclusively Asian genus of extant great ape. The largest living arboreal animals, they have proportionally longer arms than the other, more terrestrial, great apes. They are among the most intelligent primates and use a variety of sophisticated tools, also making sleeping nests each night from branches and foliage. Their hair is typically reddish-brown, instead of the brown or black hair typical of other great apes.

Native to Indonesia and Malaysia, orangutans are currently found only in rainforests on the islands of Borneo and Sumatra, though fossils have been found in Java, the Thai-Malay Peninsula, Vietnam and Mainland China. There are only two surviving species, both of which are endangered: the Bornean Orangutan (Pongo pygmaeus) and the critically endangered Sumatran Orangutan (Pongo abelii). The word "orangutan" comes from the Malay words "orang" (man) and "(h)utan" (forest); hence, "man of the forest".