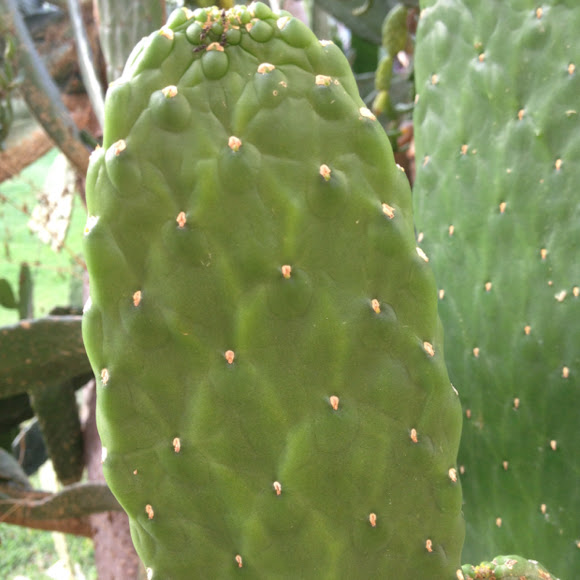 The most common culinary species is the Indian fig opuntia (O. ficus-indica). Most culinary uses of the term "prickly pear" refer to this species. Prickly pears are also known as tuna (fruit) or nopal (paddle, plural nopales) from the Nahuatl word nōpalli for the pads, or nostle, from the Nahuatl word nōchtli for the fruit; or paddle cactus. The genus is named for the Ancient Greek city of Opus, where, according to Theophrastus, an edible plant grew which could be propagated by rooting its leaves. Prickly pears typically grow with flat, rounded cladodes (also called platyclades) armed with two kinds of spines; large, smooth, fixed spines and small, hairlike prickles called glochids, that easily penetrate skin and detach from the plant. Many types of prickly pears grow into dense, tangled structures.

Like all true cactus species, prickly pears are native only to the Americas, but they have been introduced to other parts of the globe. Prickly pear species are found in abundance in Mexico, especially in the central and western regions, and in the Caribbean islands (West Indies). In the United States, prickly pears are native to many areas of the arid Western United States, including the lower elevations of the Rocky Mountains, where species such as Opuntia phaeacantha and Opuntia polyacantha become dominant, and especially in the desert Southwest. Prickly pear cactus is also native to the dry sandhills and sand dunes of the East Coast from Florida to Connecticut/Long Island (Opuntia humifusa). Further north, Opuntia occurs in isolated areas from the southern Great Lakes to southern Ontario. O. humifusa is also a prominent feature of the flora at Illinois Beach State Park, in Winthrop Harbor, Illinois, north of Chicago, and of Indiana Dunes State Park southeast of Chicago. In the Galapagos Islands, six different species are found: O. echios, O. galapageia, O. helleri, O. insularis, O. saxicola, and O. megasperma. These species are divided into 14 different varieties; most of these are confined to one or a few islands. For this reason, they have been described as "an excellent example of adaptive radiation".[2] On the whole, islands with tall, trunked varieties have giant tortoises, and islands lacking tortoises have low or prostrate forms of Opuntia. The first introduction of prickly pears into Australia can be definitely ascribed to Governor Philip and the earliest colonists in 1788. Brought from Brazil to Sydney, they remained in Sydney, New South Wales, where they were rediscovered in a farmer's garden in 1839. The farmer's wife gave cuttings to neighbors and friends, who planted it not only in their gardens, but also as hedgerows.[3] So began the Australian invasion that caused major ecological damage in the eastern states. They are also found in the Mediterranean region of Northern Africa, especially in Tunisia, where they grow all over the countryside, and southern Europe, especially on Malta, where they grow all over the islands, in the south-east of Spain, and can be found in enormous numbers in parts of South Africa, where it was introduced from South America.