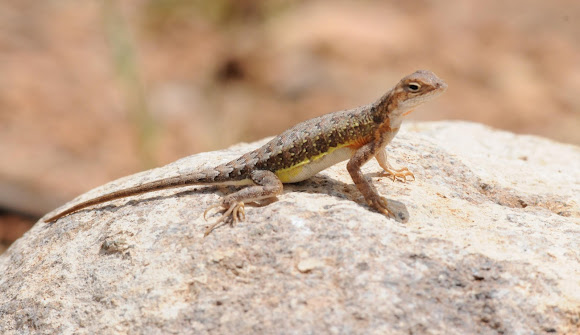 A small (up to 70 mm or 2.75" from snout to vent), gray, tan, or orange-brown lizard with variable markings. Coloration usually matches the soil on which the lizard lives. Body markings usually consist of four rows of brown blotches or chevrons extending from the neck to the tail and light speckles on the upper surfaces of the body and limbs. Some specimens lack markings. Two black bars mark each lower side of the body just behind the forelimb. Males often have a yellow tint on the lower sides, blue outlines around the side bars, copious light speckling, and less distinct dorsal blotches. Gravid females often have a pink or peach tint and an orange throat patch. As its common name implies, this lizard lacks external ear openings. The scales are small and granular. The paired bars on the lower sides of its body and its lack of ear openings distinguish this lizard from the similar looking Common Side-blotched Lizard. The underside of the tail is plain white distinguishing this lizard from the Greater Earless Lizard. The similar Elegant Earless Lizard has a longer tail, a row of chevron markings that extends to the tip of the tail, and grows to a larger size than the Common Lesser Earless Lizard. (from http://www.reptilesofaz.org)