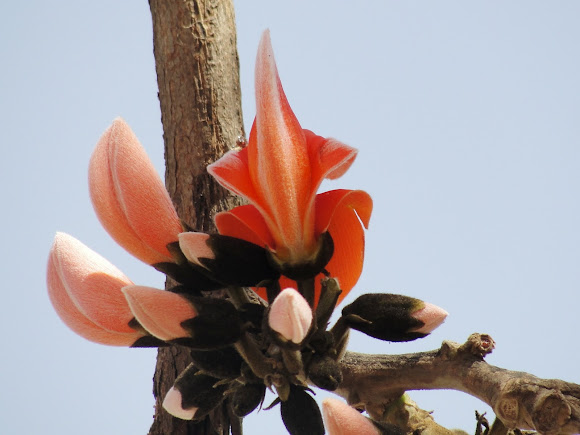 It is said that the tree is a form of Agnidev, God of Fire. It was a punishment given to Him by Goddess Parvati for disturbing Her and Lord Shiva's privacy.

It is a medium sized dry season-deciduous tree, growing to 15 m tall. It is a slow growing tree, young trees have a growth rate of a few feet per year. The leaves are pinnate, with an 8–16 cm petiole and three leaflets, each leaflet 10–20 cm long. The flowers are 2.5 cm long, bright orange-red, and produced in racemes up to 15 cm long. The fruit is a pod 15–20 cm long and 4–5 cm broad. It is used for timber, resin, fodder, medicine, and dye. The gum from the tree, called kamarkas in Hindi, is used in certain food dishes. The gum is also known as Bengal Kino and is considered valuable by druggists because of its astringent qualities and by leather workers because of its tannin. The wood is dirty white and soft and, being durable under water, is used for well-curbs and water scoops. Good charcoal can be made from it. The leaves are usually very leathery and not eaten by cattle. This plant kills Mosquitoes. The Mosquitoes are attracted by the smell and color of the flower. They lay eggs in the liquid within the flower but that eggs will never hatch. The Mosquitoes that touches the fluid can never escape from it. Historically, dhak forests covered much of the doab area between the Ganges and Yamuna, but these were cleared for agriculture in the early 19th century as the English East India Company increased tax demands on the peasants

In West Bengal, it is associated with Spring (season), especially through the poems and songs of Nobel Laureate Rabindranath Tagore, who likened its bright orange flame-like flower to fire. In Santiniketan, where Tagore lived, this flower has become an indispensable part of the celebration of spring. The plant has lent its name to the town of Palashi, famous for the historic Battle of Plassey fought there. The flowers are used to prepare traditional Holi colour. In poorer regions of many parts, for example in Maharashtra, this tree amongst others provides leaves that are used either with many pieced together or singly (only in case of a banana leaf) to make a leaf-plate for serving a meal over, and for example a would-be son-in-law was in older times (until a century ago) was tested on his dexterity in making this plate and bowl (for serving more liquid parts of the meal such as daal or stew) before being declared acceptable by the would be father-in-law.

@ Seema http://www.projectnoah.org/spottings/947... here is Indian Coral Tree ,, ,, might same you are talking about,

Here grows a tree called coral, with scarlet red blossoms... That reminds me of the resplendent palash...

@ auntnance123, more interesting about this lovely flower, In West Bengal, it is associated with Spring (season), especially through the poems and songs of Nobel Laureate Rabindranath Tagore, who likened its bright orange flame-like flower to fire. In Santiniketan, where Tagore lived, this flower has become an indispensable part of the celebration of spring. The plant has lent its name to the town of Palashi, famous for the historic Battle of Plassey fought there. *wiki

Wow, nice picture and info over shared link Ashish, thanks,

Wonderfully beautiful AND it kills mosquitoes! I need a few at my house.

Wow! That must be fun, using all natural colours and nothing that is chemically derived. I've stopped playing Holi, due to the chemicals in colours.

Thanks Satyen we still use the same for every Holi, even this year also,

We used these flowers to extract the colour in boiling water for the first holi of my kids. Amazing shots.