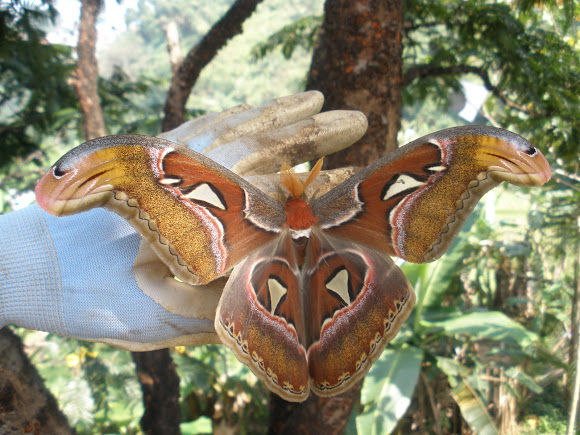 Atlas moths are considered the largest moths in the world in terms of total wing surface area [upwards of c. 400 cm2 (62 sq in)]. Their wingspans are also amongst the largest, reaching over 25 cm (10 in). Females are appreciably larger and heavier. Atlas moths are said to be named after either the Titan of Greek mythology, or their map-like wing patterns. In Hong Kong the Cantonese name translates as "snake's head moth", referring to apical extension of the forewing, which bears a passing resemblance to a snake's head. (from Wikipedia)

I was sitting outside drinking coffee one morning and I saw what I thought were dry leaves hanging from a tree in front of me. It took quite a while before I realized that it was a GIANT moth, not leaves. I ran to get my camera, and when I came back I saw what looked like a snake's head peaking out of the tree where I'd seen the moth. I jumped! Then I realized it was just the tip of the moth's wing.

Great spotting.
I've created a mission so we can document the wide variety of insects in Indonesia. It's here if you are interested. http://www.projectnoah.org/missions/1773...

I think the last picture should be first, so much nice detail!

beautiful...
photo 3 isn't coming up for me. It's showing as broken, but I guess some people can see it!