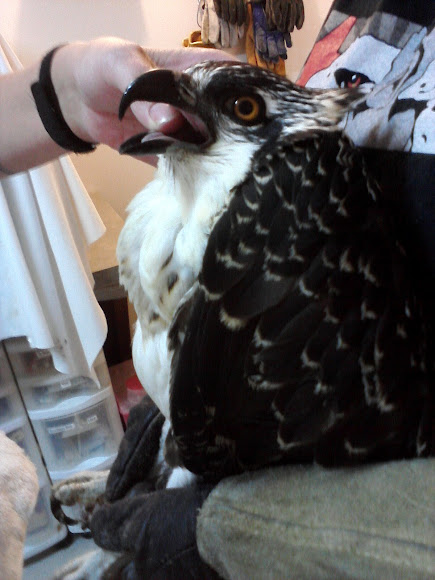 Osprey have white chests and black or brown wings. Some have black or brown markings on their faces ranging from a solid stripe to a type of faded 'helmet.' Females usually have a more distinct breast band, making this one a probable male. Osprey are physically designed for catching fish. They have small bodies with eagle-sized wings, enabling them to go underwater and pull themselves out with a fish (Eagles can't do this- if they go in the water they have to 'doggy paddle' out). They also have small spikes called spicules on their feet for grip. They are zygodactyl, meaning their fourth toe can swivel backwards to get a better hold on fish.

Osprey live on every continent except Antarctica and are abundant near flowing water.

This picture was take in a raptor clinic that I volunteer in. It's been awhile, but I believe this bird was emaciated. In this picture he is about to be tube fed.

Amazing spotting and great information, especially on the fishing style. Thanks.

great spotting and info thanks for sharing!