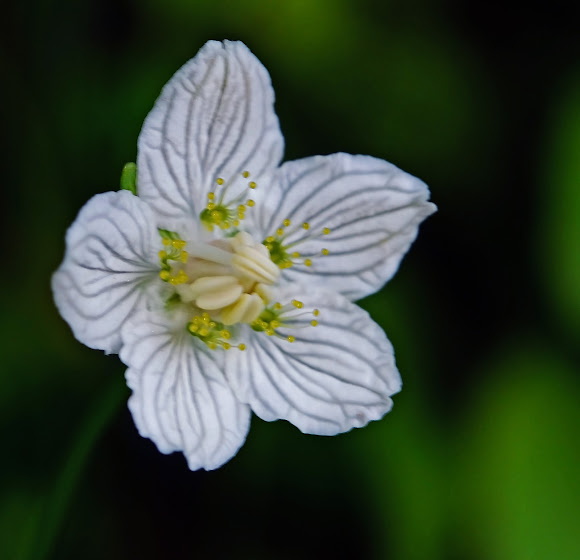 The Marsh Grass-of-Parnassus has one of the most striking reproductive system. Its single, creamy white flower with 5 conspicuously veined petals. Individual flowers are pollinated with pollen from other plants (cross-fertilization). To help accomplish this, it has decorative yet infertile ciliated "stamens" (staminodes, see them in yellow) for attracting pollinators, attached at the base of each petal. First, the five fertile (male) stamens are bent one over the other above the immature (female) stigma, as seen here. When the flower opens, the pollinators land on the bent stamens in their attempt to reach the nectar located at the base of the staminodes. As the top stamen releases its pollen onto the insect, its anther (the pollen-bearing part of the stamen) bends open and falls off. The stamen next to the ripe one will do then the same, followed by the other three. The insect then deposits pollen on the mature stigma of another, older flower.

See a picture of the flower with open stamens at http://www.projectnoah.org/spottings/409.... Found mostly in high mountain meadows, but also in marshy places, on the banks of streams, in mountain bogs. Except for a single stem leaf, all the heart-shaped leaves of this plant are produced in a basal rosette (picture 3). In Switzerland it is the only representative of the genus Parnassia. Flowers in July and August.