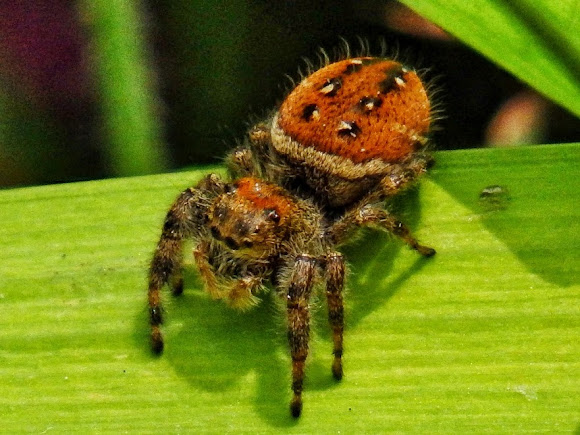 Like other jumping spiders, it has vision more acute than a cat and ten times more acute than a dragonfly. The eyes are used to locate prey and rivals, and find and court mates. All spiders have sensors for smell, taste, touch and vibration protruding through their cuticle ("skin"). umping spiders can leap up to 50 times their own length by powerfully extending the third or fourth pairs of legs, with the longer forelimbs extended to grasp the prey. P. clarus, a relatively large salticid, takes prey up to the size of an adult earwig. In an experiment, P. clarus was offered as many fruit flies as it could eat, and in four-hour sessions individuals took 17 flies on average – while one took 41. - from Wikipedia

Phidippus clarus is a species of jumping spider found in old fields throughout eastern North America. It often waits upside down near the top of a plant, which may be useful for detecting prey, and then quickly jumps down before the prey can escape. - from Wikipedia