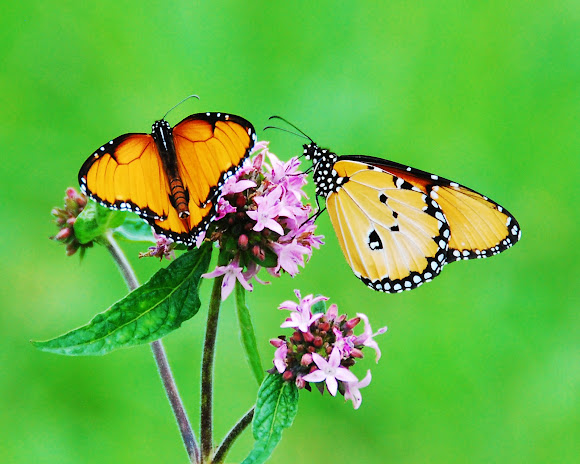 The Plain Tiger or African Monarch is a common butterfly which is widespread in Asia and Africa. It is a medium-sized, non-edible butterfly, which is mimicked by multiple species. The Plain Tiger is believed to be one of the first butterflies to be used in art. A 3500 year old Egyptian fresco in Luxor features the oldest illustration of this species. The Plain Tiger can be considered the archetypical danaine of India. Accordingly, this species has been studied in greater detail than other members of its subfamily occurring in India.

Brilliant!
Love her polka dots body and the matching trim on her wings. :-)

What a delightful butterfly. This looks like the Danaus chrysippus and was once considered a subspecies. Your one lacks the black wing tips and now is considered a distinct species. Each of the three danaus species have their own form of the mimic Hypolimnas http://www.indianaturewatch.net/displayi...
http://3axap4enko.livejournal.com/300421...