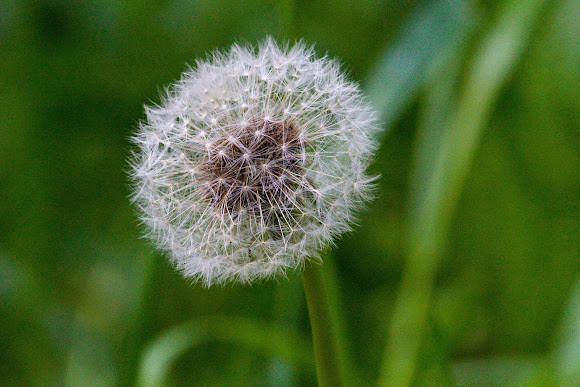 Taraxacum ( /təˈræksəkʉm/) is a large genus of flowering plants in the family Asteraceae. They are native to Eurasia and North America, and two species, T. officinale and T. erythrospermum, are found as weeds worldwide.[1] Both species are edible in their entirety.[2] The common name dandelion (/ˈdændɨlaɪ.ən/ DAN-di-ly-ən, from French dent-de-lion, meaning lion's tooth) is given to members of the genus, and like other members of the Asteraceae family, they have very small flowers collected together into a composite flower head. Each single flower in a head is called a floret. Many Taraxacum species produce seeds asexually by apomixis, where the seeds are produced without pollination, resulting in offspring that are genetically identical to the parent plant

This common weed is really quite beautiful.

Thanks, Gerardo. It's so easy to overlook the things that are so common, especially when they are often considered pests.