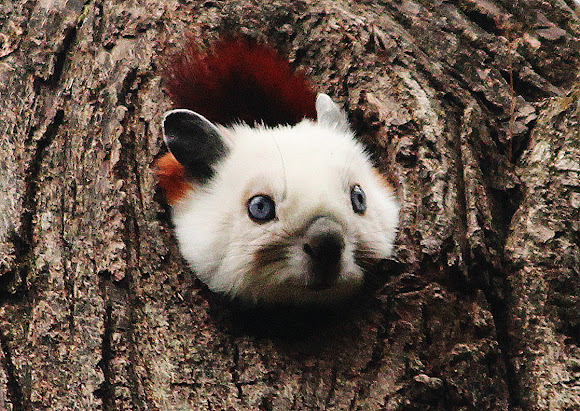 The largest species of giant squirrel over 1m (3') from head to tail with piercing blue eyes! Check out the short video clip of it gliding through the forest. This species inhabits dense montane forest, limestone cliffs and conifer forests. They are nocturnal and nest in high tree hollows.

This species is found in China in the provinces of Shaanxi, Hunan (CSIS 2008), Guangxi, Sichuan, Gansu, Hubei, Guizhou, and Yunnan, and including Taiwan (Smith and Xie 2008). It occupies elevations ranging from 800-3,500 m asl, most often from 2,000-3,000 m. This species inhabits dense montane forest, limestone cliffs and conifer forests. They are nocturnal and nest in high tree hollows.

I spotted this is Foping Reserve. The trackers knew were to find them and we hiked to a valley with tall trees that they nested in. They are a nocturnal species and in order to see them during the day, the trackers would make a bit of noise on the tree to try and get the squirrel to come out and investigate. It worked! I was lucky enough to see 3 of them and even got to see them fly. I've added my footage of them flying. They were very hard to film as I never knew when the would fly. I was lucky enough to film them flying twice during midflight. I've combined my 3 videos into one with the first one played in slow motion as well to really get a good look at how they glide.

Dan Doucette a year ago

Sorry Miss Naturaleza, Pat10, larkinpb, perriayd and maplemoth662, I missed these comments a while ago. Thanks for the kind words. @Pat10 I had the help of a guide to find them, they know where they live.

Wow!! It is awesome!! It is very beautiful! It is lovely! Some people may think it is a bird, if they don´t know about science.
Cool mammal!
For Science it is a very interesting squirrel.
Form II Yellow class (generation 2017)
Saint George`s School

What a punk look in the first photo... hahaha great pictures.

Thanks Daniel and Irene!

Great video of a remarkable animal -- those colors -- and blue eyes too!!!

Thanks robert and Paul.

It's beautiful and pics are great!

Amazing creature!! Thanks a lot for sharing!!

Thanks a lot Daniele, that is a high honour to have with so many other amazing spottings to choose from. Thanks Saman.

Thanks Teresa, Zariga and Diaz, glad I blew your mind!

This is one awesome spotting! congrats, you blew my mind!!

That thing is so cute! I want one!

Wow Dan, really awesome spot! Thanks for sharing the vid and the info. They have such blue eyes, amazing!

and 377 other people favorited this spotting