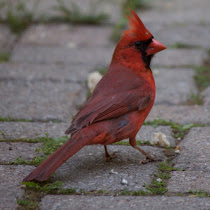 The Cardinal Rule - North Eastern US

Go out and capture as many Cardinal sightings as you can find! It's the time of year where they are out and about so lets go get some great shots. This is a local mission covering NY, PA, OH, MI & Southern Ontario only. *Edited by Project Noah management team to comply with user-created mission rules. Sign in to join mission

This is a mission to gather as many pictures and information on Cardinals as possible. Size & Shape The Northern Cardinal is a fairly large, long-tailed songbird with a short, very thick bill and a prominent crest. Cardinals often sit with a hunched-over posture and with the tail pointed straight down. Color Pattern Male cardinals are brilliant red all over, with a reddish bill and black face immediately around the bill. Females are pale brown overall with warm reddish tinges in the wings, tail, and crest. They have the same black face and red-orange bill. Behavior Northern Cardinals tend to sit low in shrubs and trees or forage on or near the ground, often in pairs. They are common at bird feeders but may be inconspicuous away from them, at least until you learn their loud, metallic chip note. Habitat Look for Northern Cardinals in inhabited areas such as backyards, parks, woodlots, and shrubby forest edges. Northern Cardinals nest in dense tangles of shrubs and vines. Information from: http://www.allaboutbirds.org/Page.aspx?pid=1189