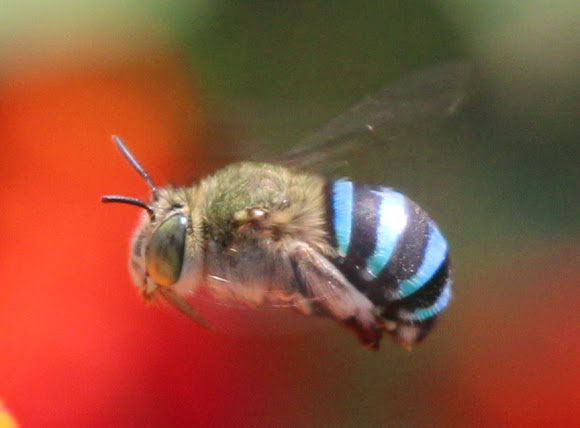 The genus Amegilla is common species throughout the Asia-Pacific region from China all the way to Australia. This bee has a very striking appearance. There are many different species in this genus. Blue-banded bees are so called because their abdomens are striped with brilliant blue or blue-green on black. They can sting but are not as aggressive as other bees. The males cling to plant stems during the night. Like the whole anthophoridae family, they are quick and agile. They are solitary creatures, whereas honey bees create hives. A. cingulata collects the majority of its nectar from blue flowers, although they also feed on some non-blue flowers. The bees use a process that involves clinging onto flowers and vibrating powerfully, which causes the food source to shoot out. They only have a limited foraging range of 300 m, while females make at least nine foraging flights per day. Amegilla cingulata builds a solitary nest, but often close to one another. It prefers soft sandstone to burrow in, and areas of this type of rock can become riddled with bee tunnels. Blue banded bees also tend to nest in burrows, dried up river banks, old clay homes and in mortar between bricks. Cells at the end of tunnels contain an egg with a pollen/nectar mixture for emerging larvae

Seen on a Lantana plant in my garden. The bees inhabit urban areas, woodlands, forests and heath areas.

Thanks a lot Neil and Frederic :)

That's a good looking one!
First time I see it. Thanks for sharing.

Haha Not on your life!

Thanks macaul. My camera is the size of a normal dslr, and the lens is a 100-400mm telephoto zoom lens.

Wow! How big is your camera!

and getting closer still...
http://www.projectnoah.org/spottings/179...
Now there are many of them in the garden.

Hi Satyan... getting closer to getting a good shot of this Blue-banded Bee that lives in my garden!
http://www.projectnoah.org/spottings/170...
the new camera helps!

Congrats!
Such an amazing combination of colors and contrast!

Thanks a lot Atul!

Thanks Jeannette, gatorfellows and Mac.

and 176 other people favorited this spotting