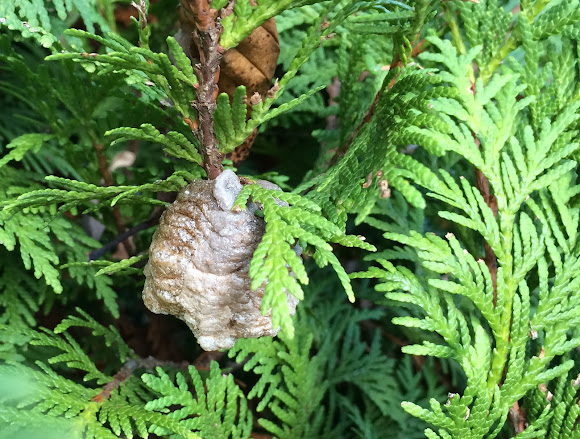 The word mantis comes from the Greek mantikos, for soothsayer or prophet. Mantids are unique among insects in their ability to turn their heads a full 180 degrees. A praying mantis is just as likely to eat a native bee that's pollinating your plants as it is to eat a caterpillar pest. Tenodera sinensis feeds primarily on other insects, though adult females in particular sometimes catches small vertebrates. For example, they have been documented as feeding on small reptiles, amphibians and even small species of hummingbirds. Like most mantids, they are known to be cannibalistic. Also like most mantids they do not generally avoid toxic or venomous prey, however they have been observed eating the larvae of monarch butterflies, but discarding the entrails. The Chinese Mantis is a long, slender, brown and green praying mantis. It is typically longer than most other praying mantises reaching just over 11 centimeters, and is the largest mantis species in North America Its color can vary from overall green to brown with a green lateral stripe on the borders of each side of the front wings in the brown color form. If the spot in between their front leg is yellow then it is a Chinese Mantis. The female can produce several spherical ootheca roughly the size of a table tennis ball, containing up to 400 eggs. The oothecae are often affixed to vegetation such as bushes and small trees. A praying mantis has two large, compound eyes that work together to help it decipher visual cues. But strangely, the praying mantis has just a single ear, located on the underside of its belly, just forward of its hind legs. This means the mantid cannot discriminate the direction of sound, nor its frequency. What it can do is detect ultrasound, or sound produced by echolocating bats. Studies have shown that praying mantids are quite good at evading bats. A mantis in flight will essentially stop, drop, and roll in midair, dive bombing away from the hungry predator. Not all mantids have an ear, and those that don't are typically flightless, so they don't have to flee flying predators like bats.

Found in great numbers in grasses and trees in tropical, subtropical, temperate climates and countries with mild winters.

The eggs of a mantis are enclosed in a foamy pouch called an ootheca or egg sack. An ootheca usually contains many eggs surrounded by a foam of protein which may then harden into a tough casing for protection. Ootheca can vary immensely; some can be a few millimetres long, whilst some can stretch up to around 8cm long. There are some species, which will lay large, round foamy ootheca, whereas some will lay short, thick, tough ootheca. The amount of nymphs and ootheca hatches also varies; some can hatch up to 10, whereas some can hatch up to 400. Some mantids will only lay 1 or 2 ootheca, whereas some can lay up to 20 in their lives.

Thank you for that correction !

This would be a nice addition to the Marvelous Mantids of the World mission:
http://www.projectnoah.org/missions/1573...