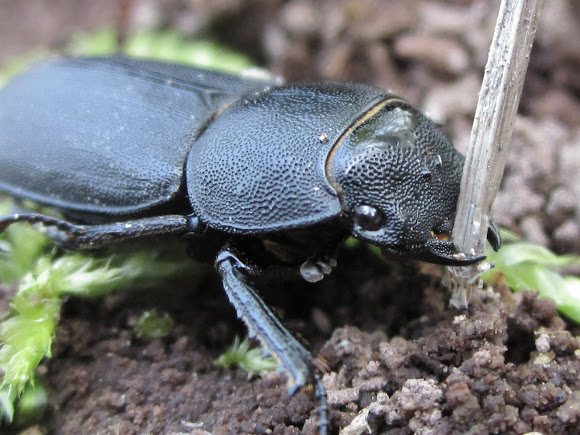 Dorcus parallelipipedus, the lesser stag beetle, is a species of stag beetle found in Europe. Both sexes resemble the female stag beetle (Lucanus cervus), though they are a uniformly blackish colour rather than having the chestnut brown wing covers of the larger species. Males have distinctly knobbed antennae, and although their jaws are somewhat larger than those of the females, they are nowhere near as large as those of many other male stag beetles. The lesser stag beetle is similar in appearance to the related antelope beetle (Dorcus parallelus) of North America. Adults are from 18 to 32 mm (0.7 to 1.3 in) in length. Like those of other stag beetles, the white, C-shaped larvae feeds on wood. Adults as well as larvae are found in very soft decaying wood of broad-leaved trees, especially ash (Fraxinus excelsior), beech (Fagus sylvatica) and apple (Malus spp). Adults are active in summer and disperse by flying, and sometimes coming to outside lights. This is a widespread species in most of England and is generally common (except in the far north), coming into gardens wherever there are orchards, old hedges or large trees ( wikipedia )

Scientific name: Dorcus parallelipipedus Size: 25 - 32mm long Distribution: Found in many parts of Britain, especially the southern counties of England Months seen: May to October. Active at night Habitat: Woodlands, parks and gardens Food: Tree sap. The larvae feed on rotting wood Special features: Lesser Stag Beetles closely resemble female Stag Beetles, but on a smaller scale. The head is much squarer than the larger female stag beetle, and the middle tibia of the rear leg has just one spur. On a female stag beetle there are three. The body and legs are all black. The antennae are elbowed and the tips are club-shaped. Lesser stag beetles are nocturnal, and are attracted to lights at night. In the daytime they can be found sheltering amongst rotten wood and leaf litter. Unlike Stag Beetles which only live as an adult for a few weeks, Lesser Stag Beetles live for at least a year. They spend the winter in a torpid state under bark, or deep in rotting wood. ( http://www.uksafari.com/lesser_stag_beet... )

Common throughout England and Wales northwards to south Yorkshire. Adults can be found throughout the year; overwinter in rotten wood or among logs in woodpiles, during the spring and summer they are often seen diurnally on treetrunks or wandering on the ground. They fly readily at night but, in our experience, do not come to light. Large colonies containing both larvae and adults are occasionally found in standing or fallen timber of a wide range of deciduous trees. We have found these in both wet and dry rotting wood. Sometimes found breeding alongside Sinodendron or Lucanus. The Histerids, Aeletes and Plegaderus are often associated with Dorcus infested wood. 20-32mm. Black, impunctate. Longitudinal grooves on the upper surface of the protibia will distinguish this from other British Lucanidae. Head and pronotum less shining than elytra in male, female head with two tubercles. Plegaderus dissectus Erichson, our only member of the genus, is a rare histerid of England north to Nottinghamshire, occuring in wet decaying broadleaved timber. A small, 1-1.5mm., black or dark brown species, unique among our histerid fauna in having a deep transverse impression across the centre of the pronotum. Aeletes atomarius (Aube), our only member of the genus, is a tiny dark brown histerid associated with Dorcus burrows and, on the continent, with the ant, Lasius brunneus (Lat.). Distinguished by its small size, 0.8-1mm., indistinct shallow puncturation to upper surface and lack of visible scutellum. Hereford and Worcester ( http://www.thewcg.org.uk/lucanidae/0220G... ), ( http://www.soortenbank.nl/soorten.php?so... )

to answer your question kris b: the beetle was still half stiff from hibernation in the wood of a dead tree. To see if he was still alive, i poked him gently with the twig. after i saw that he began to move slightly, had i set him at the surface of the tree, there have i hold the twig between his jaws, and he grabbed it. After he closed the jaws, there were no need for me to hold on to the twig, and i took the pictures.
therefore: the beetle hold the twig himself

Kris B 8 years ago

Hi Alex! I'm wondering if You were holding the stick the Beetle was wrestling with?!