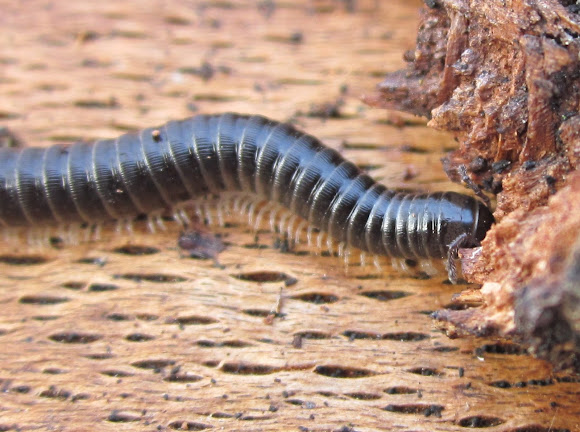 Millipedes are arthropods that have two pairs of legs per segment (except for the first segment behind the head which does not have any appendages at all, and the next few which only have one pair of legs). Each segment that has two pairs of legs is a result of two single segments fused together as one. Most millipedes have very elongated cylindrical bodies, although some are flattened dorso-ventrally, while pill millipedes are shorter and can roll into a ball, like a pillbug. The name "millipede" is a compound word formed from the Latin roots mille ("thousand") and pes ("foot"). Despite their name, no known millipede has 1,000 legs, although the rare species Illacme plenipes has up to 750.[2] Common species have between 36 and 400 legs. The class contains around 10,000 species in 13 orders and 115 families. The giant African millipede (Archispirostreptus gigas), is the largest species of millipede. Millipedes are detritivores and slow moving. Most millipedes eat decaying leaves and other dead plant matter, moisturising the food with secretions and then scraping it in with their jaws. However, they can also be minor garden pests, especially in greenhouses where they can cause severe damage to emergent seedlings. Signs of millipede damage include the stripping of the outer layers of a young plant stem and irregular damage to leaves and plant apices, the very top of a plant. Millipedes can be easily distinguished from the somewhat similar and related centipedes (Class Chilopoda), which move rapidly, and have a single pair of legs for each body segment

This class of arthropod is thought to be among the first animals to have colonised land during the Silurian geologic period. These early forms probably ate mosses and primitive vascular plants. The oldest known land creature, Pneumodesmus newmani, was a 1 centimetre (0.39 in) long millipede, and lived 428 million years ago. In the Upper Carboniferous (340 to 280 million years ago), Arthropleura became the largest known land invertebrate of all time, reaching lengths of up to 2.6 metres ( http://en.wikipedia.org/wiki/Millipede#E... )

Due to their lack of speed and their inability to bite or sting, millipedes' primary defense mechanism is to curl into a tight coil — protecting their delicate legs inside an armored body exterior. Many species also emit poisonous liquid secretions or hydrogen cyanide gas through microscopic pores called odoriferous glands along the sides of their bodies as a secondary defense. Some of these substances are caustic and can burn the exoskeleton of ants and other insect predators, and the skin and eyes of larger predators. Animals such as Capuchin monkeys have been observed intentionally irritating millipedes in order to rub the chemicals on themselves to repel mosquitoes. At least one species, Polyxenus fasciculatus, employs detachable bristles to entangle ants. As far as humans are concerned, this chemical brew is fairly harmless, usually causing only minor effects on the skin, the main effect being discoloration, but other effects may also include pain, itching, local erythema, edema, blisters, eczema, and occasionally cracked skin. Eye exposures to these secretions causes general eye irritation and potentially more severe effects such as conjunctivitis and keratitis. First aid consists of flushing the area thoroughly with water; further treatment is aimed at relieving the local effects ( http://en.wikipedia.org/wiki/Millipede#D... ), ( http://www.natur-in-nrw.de/HTML/Tiere/My... ), ( http://www.pawsforwildlife.co.uk/cylindr... ), ( http://bugguide.net/node/view/101505 ),