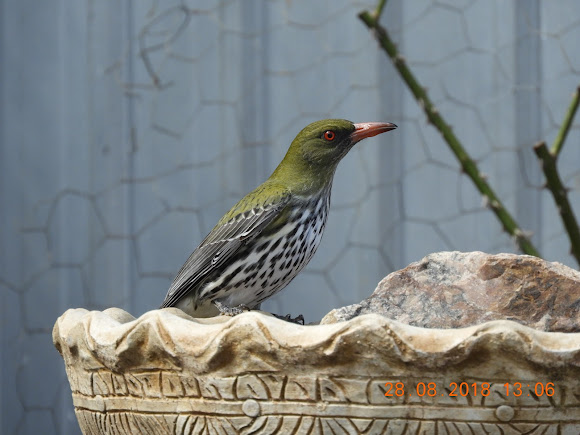 Male:- Head to scapulars, on upper parts and rump, are a rich olive-green, with very faint black streaks. Wing coverts and wings are dusky, with the feathers broadly edged and washed mid-grey. Tail is mid-grey, with the outer feathers narrowly to broadly tipped white. Chin is grey-green, streaked black, grading into white underparts, which are clearly marked with short, black streaks. Eye is orange-red. Bill is a dull brick-red. Feet are a leaden grey. Female:- More clearly streaked (than male) on the back and more coarsely streaked below. Slightly smaller.

Pictured on the bird-bath, in my back yard.

Family:- Oriolidae. These are medium sized, wholly arboreal birds. They have strong, slightly down-curved, finely bristled and often reddish notched bills. Much yellow and bright green in plumage. Immatures are streaked. Usually about 250 - 280mm. Also called:- Cedar Bird; Oriole or 'Green Thrush'. The call is a rolling, mellow, bubbled olio or orry-ol, in contact. Scolding note is harsh. Song:- This is an extension of the contact call. A rippling, rolling, carrying olly-olly-o-lol and variations. These are shallower, less resonant and more protracted than the Yellow Oriole. Subsong;- Is also of scratchy warbles and mimicry. These birds live throughout Eucalypt woodland or open forests. Across northern and eastern Australia they are widespread. Feeding in the upper foliage and branches, on fruit or insects, which they glean from the outer leaves and twigs. Found in dispersed pairs or alone. In the autumn, southern birds (about 27 degrees south) may move north to central and north-eastern Queensland returning south in the spring, for breeding. Flight is silent, swift and has a gentle rise and fall, giving a wavy appearance. Reference:- Reader's Digest Complete Book of Australian Birds.

Great shot! Thank you for sharing :)