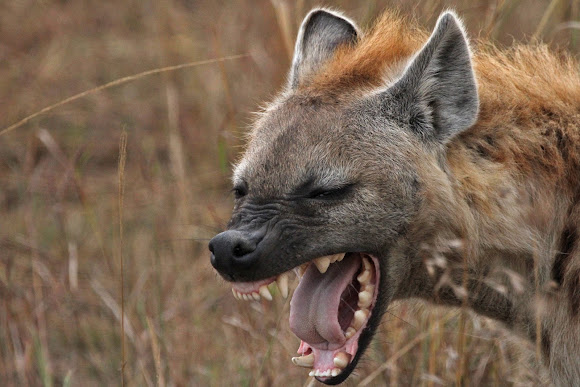 Spotted hyenas are the infamous 'laughing hyenas' of the African savannah. A monospecific species native to sub-Saharan Africa, their name has so arisen due to their unusual 'laugh'-like call. They are the most social predators in the region and form large, highly efficient groups that can kill wildebeest; they are also opportunists, which has earned them their unfair connotation of vicious scavengers. While they are certainly vicious, they scavenge only as need and opportunity arises and are the best predators, in terms of efficiency, in the area.

They are found in open savannah, semi-desert, open woodland, and mountainous forest up to 4000 feet high.

The first picture was taken when a hyena, sleeping in a ditch by the road, was startled by our jeep and jumped out; he then yawned widely, not bothered with the humans. The second was taken from a hot air balloon and the third and fourth are of juveniles.

Thank you mika.hyden! I look forward to November 18th. :) I emailed you; thank you so much for reading my blog post!

Thank you! Your photo will be highlighted on Tuesday, November 18th. Afterwards, you’ll be able to see your photo for about a month in the Pic of the Day Collection (www.greatnatureproject.org/collections/1...).

Thank you! I would be honored for my photograph to be highlighted.

Congratulations! We would like to highlight this photo as National Geographic’s Great Nature Project Pic of the Day! It will be featured in the lower left corner on The Great Nature Project website (www.greatnatureproject.org), as well as on the NG Education Facebook page.

We will attribute this photo to you by using your username, duttagupta35504. Once we hear back from you (either here or via email to GreatNatureProject@ngs.org), we’ll let you know which date we’ll highlight your photo. Thank you for sharing your observations with The Great Nature Project!