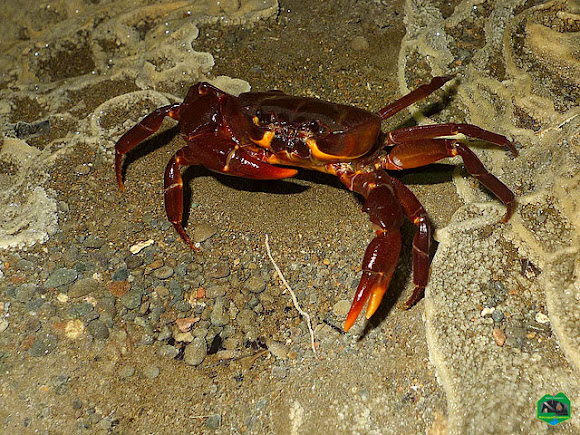 Spotted 350M in Alab Cave, Baggao, Cagayan. Possibly a new species because this differs from only described species in the Cagayan area. http://philjournalsci.dost.gov.ph/vol139...

J.C. Mendoza and T. Naruse (2010): All freshwater crabs undergo direct development (whereby all larval stages are lacking), where the ovigerous female broods a few large, lecithotrophic eggs that hatch into tiny hatchling crabs (Ng 1988). This reproductive strategy effectively restricts freshwater crabs to habitats in or adjacent to freshwater, and limits their ability to disperse across geographical barriers such as mountain ranges or large expanses of salt water.

No, not yet Ann, but this was posted in the Phil. Biodiversity Net FB group about the same: http://www.philstar.com/Article.aspx?art...

JC Mendoza (Phil. Biodiversity Net) commented: This is yet another Sundathelphusa sp. (maybe undescribed). The colouration and carapace shape are quite different from that of the Sundathelphusa cagayana (which until now was the only Sundathelphusa known from Cagayan). This one doesn't look like an obligate troglobitic species though. Unfortunately, we really need to see the male genitalia to make a definite ID. For future reference, take a photo of the ventral aspect as well =).