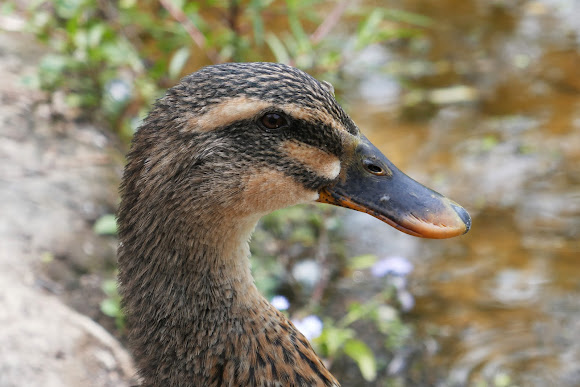 The northern mallard belongs to the subfamily Anatinae of the waterfowl family Anatidae. It's an introduced species in Australia (around 1862), and its natural range is across much of the northern hemisphere. It is one of the most prolific and recognized waterfowl in the world. NB: Male mallards are unmistakable with a green head separated from a chestnut breast by a white collar, but females can be difficult to distinguish from the native Australian species "pacific black duck" (Anas superciliosa). Here's a spotting for comparison - https://www.projectnoah.org/spottings/78... The two species do interbreed, producing pale hybrids (see notes). The pacific black duck has a distinctive black-and-white striped face and dark body plumage contrasting with white underwings in flight. They also have grey or brown feet while female mallards and hybrids tend to have orange feet. The female's plumage is described as being drab brown, but upon closer inspection, I think her plumage is quite beautiful.

This pond was situated in remnant eucalyptus woodland on the campus of Griffith University, Mt. Gravatt, which is adjacent to the Mt. Gravatt Conservation Reserve. This female was seen drinking pond water and feeding on bunchy sedge (Cyperus polystachyos). https://www.projectnoah.org/spottings/10...

"Mallards are causing severe "genetic pollution" to South Africa's biodiversity by breeding with endemic ducks even though the Agreement on the Conservation of African-Eurasian Migratory Waterbirds – an agreement to protect the local waterfowl populations – applies to the mallard as well as other ducks. The hybrids of mallards and the yellow-billed duck are fertile, capable of producing hybrid offspring. If this continues, only hybrids occur and in the long term result in the extinction of various indigenous waterfowl. The mallard duck can cross breed with 63 other species, posing a severe threat to indigenous waterfowl's genetic integrity. Mallards and their hybrids compete with indigenous birds for resources, including nest sites, roosting sites, and food...... Over time, a continuum of hybrids ranging between almost typical examples of either species develop; the speciation process is beginning to reverse itself. This has created conservation concerns for relatives of the mallard, such as the Hawaiian duck, the New Zealand grey duck (A. s. superciliosa) subspecies of the Pacific black duck, the American black duck, the mottled duck, Meller's duck, the yellow-billed duck, and the Mexican duck, in the latter case even leading to a dispute as to whether these birds should be considered a species (and thus entitled to more conservation research and funding) or included in the mallard species. Ecological changes and hunting have also led to a decline of local species; for example, the New Zealand grey duck population declined drastically due to overhunting in the mid-20th century." (Wikipedia) However, mallards are also of economic importance for humans in the sense that they are an important game species for hunting, and also as a food source. https://animaldiversity.org/accounts/Ana... What concerns me here in this country is that female mallards are very similar in appearance to the protected Australian pacific black duck. They tend to share the same habitats, so I wonder how many protected natives are shot due to misidentification.

Thanks, Jae. She wasn't concerned about me, nor was her white mate. Accustomed to people, no doubt.