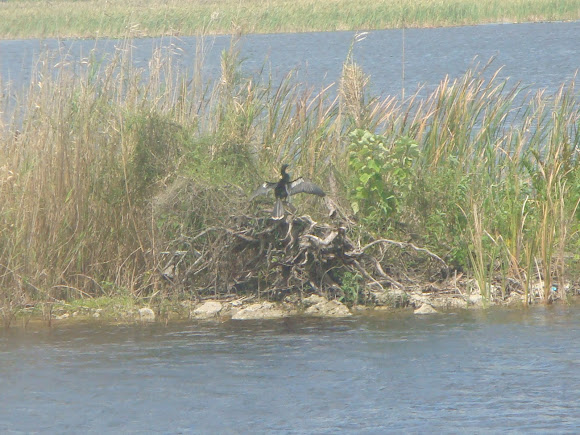 The anhinga is a large bird with a long S-shaped neck and a long pointed bill. The male has grayish-black feathers with a greenish shine to them. They have large wings with silver-white feathers on the top side. Females have a light tan head, neck and chest and a black stomach. Both the male and the female have long fan- shaped tail feathers and sometimes the anhinga is known as the water turkey. The anhinga has poorly developed oil glands and its feathers aren't as waterproof as other water birds are. It will perch in a tree with its wings open to dry its feathers and warm its body. Using their sharp bills, anhingas spear fish, flip them in the air and swallow them head-first. Sometimes they spear them so hard they have to return to shore with the fish still on their bill, and bang the fish off on a rock. When anhingas are in their breeding plumage they have a blue ring around their eyes. The female lays three to five light blue eggs. The nest is in a tree and it is made of sticks and lined with leaves. The chicks hatch in about a month. The anhinga is also known as the snakebird. When it swims, its body is submerged under the water. It stretches its head and neck flat out on the surface of the water. Its head and neck look like a snake gliding through the water.

Anhingas breed off the Gulf Coast and the Atlantic Coast from North Carolina to Texas and in the Mississippi Valley north to Kentucky and Missouri. They winter along the Gulf Coast north to North Carolina. Anhingas can be found in freshwater ponds and swamps where there is thick vegetation and tall trees.