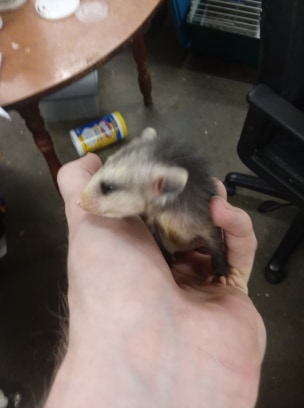 The only marsupial North of Mexico, the Virigian, or North American opossum. These little guys don't get the credit they deserve, usually stereotyped as plague bearers and vermin. Opossums body temps run too cold for rabies and they eat ticks that carry Lyme disease, a serious medical condition. Not that they don't have their issues, but opossums do a lot of good. This particular jack (that's what a male baby opossum is called, females are jills, that's hilarious) was found next to a dead mother on the highway. He's being taken to a animal rehabilitation center for future release back into the wild.

I have no idea about that. Do a vacation first. Get out of the cities. Natural history here is mind-blowing. I love our animals :)

I love Australia's biodiversity, how difficult would it be to get a VISA to live there?

Jesus, any animal that will stand up to a freaking wedge tail has my respect.

This was an amazing story, and my money would be on the quoll. That eagle is at a distinct disadvantage being on the ground, and the quoll is super fast and ferocious! My spirit animal :) https://www.theland.com.au/story/4857398... " And this caption caught my imagination: "The great Eastern Fall, where the New England tablelands slip steeply towards the coast, is home to a rare wilderness, where quolls argue with eagles." I've actually been to this national park in northern NSW. It is world heritage listed.

Don't mention brushtail possums to New Zealanders (Kiwi's). They hate them with a passion! Some idiot took them over there and now they are an invasive species.

I definitely see the resemblance to the quoll. It's interesting to see the Native perspective to what are (for me) exotic animals, maybe it's because Americans have only really been exposed to brushtails because of memes comparing our possum species, but brushtails are VERY popular here.

I don't think opossums are ugly at all, and I certainly don't think our largest possums (brushtails) are particularly attractive. I listen to them stomping across my roof each evening, so there's no great love lost. Very different animals too. I reckon your opossums would be more like out quolls. Just look at their teeth to see the similarities. https://animals-are-cool.fandom.com/wiki...

Yeah our possums don't get much love (being uglier than Australian possums) but they do a lot of good :)

Poor little fellow. I hope he fares well. Didn't know about the rabies and ticks either.