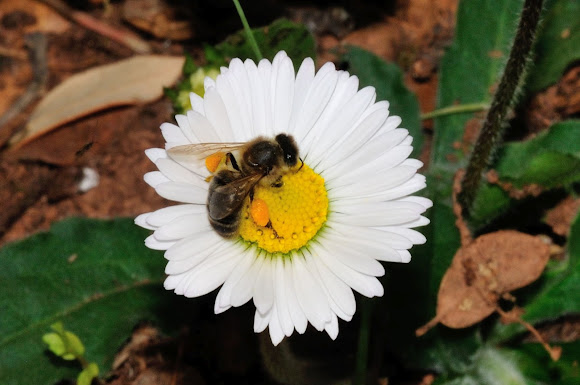 Apis mellifera iberiensis also known as A. mellifera iberica (Spanish: mellifera iberica), is a Western honey bee subspecies native to Spain and Portugal. Apis mellifera iberiensis are very vigorous and active at temperatures where other subspecies of bees are not leaving the hive, supporting long, cold winters. They have a length of the forewings with an average of 9.226 mm and 3.098 mm while the width of the subspecies Apis mellifera mellifera is 9.381 mm and 3.0293 mm respectively. The first description of this bee of the Iberian Peninsula was published in the magazine Bee World, made by B. Adam. F. Ruttner described it in his book "Biogeography and Taxonomy of Honeybees." in base to the description of B. Adam. B.Adam collect their views on a trip he made in 1959 by Spain and Portugal. A. m. iberiensis has the body size of European subspecies with forewings narrower and wider abdomen. It is mostly dark brown to jet-black. The darkness is accentuated by the low tomentum and low hairiness. The queens are black almost uniform in color. They are prolific and with high fertility controlled by environmental conditions.

This subspecies is well characterized towards the south and west of a line passing from Zaragoza to Barcelona in Iberian peninsula. It was spotted in open Mediterranean forest at Parque Nacional de Monfragüe

Thanks C.Sydes, yes, the pollen sacs are incredible

look how full her pollen sacs are; lovely spot