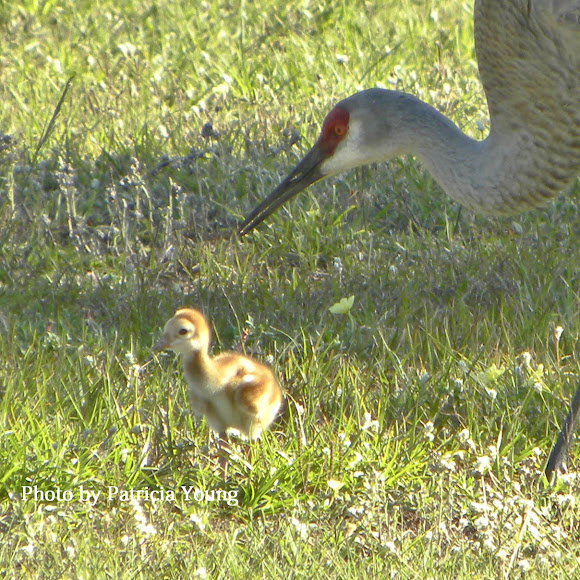 I have been watching a Sand hill Crane on her nest, her 2 eggs hatched out, and the baby's are about a week old.Florida Sand-hill Cranes,( Grus canadensis pratensis) are an Threatened species, according to the U.S. Migratory Bird Treaty Act and state Wildlife Code.

Sandhill Cranes have built a nest. And are sitting on their eggs.Females usually lay two eggs and incubation (by both sexes) lasts 29-32 days. The male takes the primary role in defending the nest against possible danger. The Florida subspecies requires an area with at least some standing water to initiate nesting. The species has been known to delay breeding during the years when water levels were unfavorable. Florida Sandhill Cranes require both upland and wetland habitats for successful nesting. The long-term productivity of the Sandhill cranes is dependent not only on the presence of wetlands with suitable hydroperiods, but also proximity to foraging habitat, which includes uplands (range, pasture and pasture-forest transition) and wetlands next to or in open range or pastures The importance of the relationship of wetlands and uplands is critical to the cranes survival.

The babies are very cute and follow the mother and father around. While the mother sat on the nest, the father would bring her food, they mate for life.

Awesome! What a cute family!

Thank you. Yes I have a video of the cranes dancing in the Florida Withlachoocee forest, I put it up on You tube.

wow ! really cute video of the chicks playing together! These a re beautiful birds? Have you seen a crane dance?

WOW! what a bright close up!

Thank You, Emma! Thank you, Alice. I missed you both!

Welcome back, Nice series, from nest to following their parents. Good information.