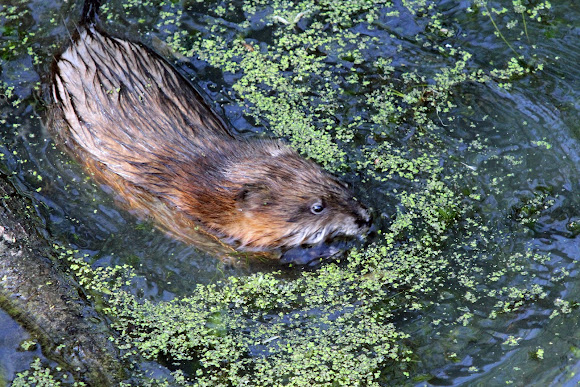 Muskrat Habitat The muskrat generally inhabits wetlands with an abundant supply of aquatic vegetation such as swamps, coastal and freshwater marshes, lakes, ponds, and slow-moving streams. Weight 2-4 pounds. Length: 18-25 inches; tail: 8-11 inches. Diet Primarily aquatic plants including cattails, arrowheads, and duckweeds. Occasionally eats crayfish, snails, mussels, frogs, insects, and slow-moving fish. Identification: The muskrat is a large, stout, semi-aquatic rodent. Its head is broad and blunt with short ears barely visible beyond the fur. The muskrat's coat is practically waterproof and is soft, dense, and grayish brown in color. The underfur is covered by long, brown guard hairs which serve to protect the soft underhair from wear. Its tail is scaled, nearly hairless, and somewhat flattened on the sides. The muskrat is further adapted for its semi-aquatic life with lips that act as valves, closing behind the front incisors so it can actually gnaw underwater. Range The muskrat is found throughout the United States except in the predominantly dry areas. It is common in New England and throughout Connecticut. Reproduction Muskrats have a high reproductive rate, producing up to four litters per year each with six to seven young. They are polygamous and breeding takes place from late March through July. After a gestation period of 28 to 30 days, the young are born blind, helpless, and almost naked. In two weeks, their eyes open and in approximately eight weeks they are weaned from their mother. Interesting Facts Muskrats live in or near water most of their lives. They make their homes in bank dens or lodges similar to those of the beaver but smaller in size. Muskrats excavate dens by burrowing into the banks of slow-moving streams with their sharp front claws. The dens are complete with dry chambers and underwater tunnels, and there are ventilation holes which are hidden at the surface by shrubs, branches, and thick vegetation. The lodges, constructed with aquatic plants, brush and mud, are usually situated on a foundation of brush or a stump or are occasionally built up from the bottom of the wetland. Several small feeding huts that are similar to, but less complex than the lodges, may be constructed within the muskrat's territory. Here the animal will periodically feed while protected from predators and harsh weather. Muskrats are active throughout the year and, although mainly nocturnal, are sometimes seen during the day. They are susceptible to cold and wind and spend more time in their dens during the winter. Although several may share a lodge during the winter. Muskrats are highly territorial and aggressive toward each other. In fact, a female may kill newly-weaned young in an effort to drive them away before the arrival of a new litter. The muskrat's normal home range is usually within 200 yards of its den, although it may travel several miles over land in search of suitable habitat. With their webbed hind feet acting as paddles and their tail as a rudder, muskrats swim at a speed up to 3 miles per hour and can even swim backwards. The muskrat can give a warning slap with its tail, similar to the beaver, and remain submerged for as long as 15 minutes. Muskrats may modify wetland habitat making it more attractive to a wide variety of wildlife. However, high populations of muskrats can eliminate too much aquatic vegetation making the habitat less suitable to some species. The muskrat leads all North American wild furbearers in the number of animals caught and total pelt value.

Thank you alicelongmartin
The good sized rodent was very much obliged to be good model.

Excellent pictures of the Muskrat!