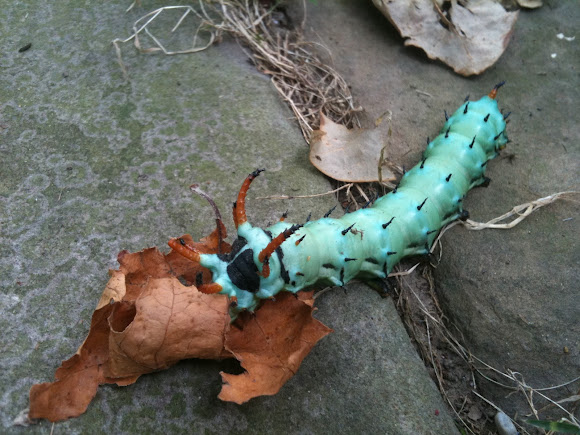 Larva: The hickory horned devil is among the largest of our native saturniid caterpillars. It is 12.5 to 14 cm in length - about the size of a large hot dog. The caterpillars vary slightly in color, but are commonly blue-green. The second and third thoracic segments each bear two long and two shorter orange, black-tipped scoli (tubercles in the form of spinose projections of the body wall). The abdominal segments each have four short, black scoli, and segments 2 through 8 have a pale, oblique lateral stripe. Although the larva has a fierce appearance, it is harmless.

The regal moth is found throughout the deciduous forest areas of the eastern United States from Missouri to Massachusetts and southward to Texas and central Florida. It is more common in the southern part of its distribution.

Life Cycle: The regal moth typically has only a single generation per year, although a few late collection records suggest the possibility of a small second brood in the deep south. In Florida, adults have been collected in May, but are more common during the summer. Adults have vestigial mouthparts. Adults mate during the second evening after emergence and begin oviposition at dusk of the third evening. Eggs hatch in six to 10 days, and the duration of the larval stage is about 35 days. In central Florida, larvae are usually found from late July to mid-August while they are wandering on the ground searching for a suitable location to burrow into the soil for pupation. The pupa is the overwintering stage.

Hosts: Larvae have been reported from a variety of host tree species. They are commonly found on species of the family (Juglandaceae) including walnut (Juglans nigra), butternut or white walnut (Juglans cinerea), and a variety of hickories (Carya spp.) including pecan. In Florida, larvae are frequently found on sweetgum (Liquidambar styraciflua). Other hosts commonly listed are persimmon (Diospyros virginiana) and sumacs (Rhus spp.).

Awesome spot!!!! I love the color.

Wonderful, reminds me of one of those Chinese dragons.

Incredible! Could you add it to my mission?
http://www.projectnoah.org/missions/1104...

Amazing! Please add to mission, Moths of NE US!

The sensation of this one walking on you hand was very very strange. I caught it to show to a friend and within a couple of days it pupated. I now have it sitting in a container on the porch hoping it will emerge this summer.

I think that I want to see about purchasing some of these and raising to watch the entire life cycle.