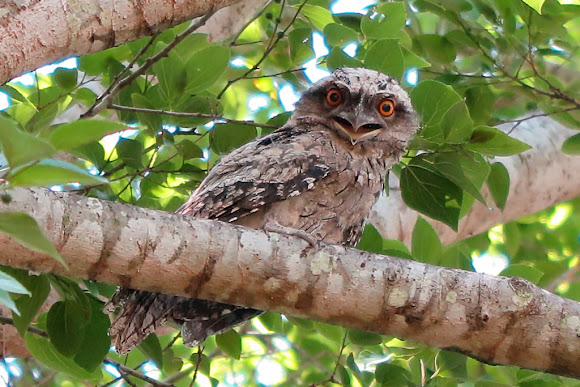 I am so delighted to see Tawny Frogmouths return to my yard. I've not seen any here since my last spotting back in 2012 - http://www.projectnoah.org/spottings/212... and have not seen chicks since 2010. This spotting is a very young bird, and although it looks fully grown, it's fidgeting behaviour gives a good indication of its age. The facial expression on this bird was due to its first sighting of a cat. In fact, four cats... and a human. Its eyes were wide-open as if astonished to see such odd creatures, and its mouth was gaped. There was a lot of movement as its head turned from side-to-side, and up-and down, taking in all the activity beneath it. There was an adult in the tree which had assumed the characteristic 'stumping' pose, which is a type of camouflage so the bird looks like a part of the tree (see last photo). The little one was moving around way too much to be inconspicuous. It was also 40 degrees celsius (104 degrees fahrenheit) the day these photos were taken, so that would account for the birds casual posture in the second-last photo.

One of the favourite roosting trees in my yard for Tawnies is a large Chinese Elm, now in full leaf. Located in a suburban backyard in an inner-city suburb of Brisbane.

He was psycho too. Must have been the heat.

Driving me psycho at the moment!

Most Aussie backyards have something cool to offer. I feel very fortunate to have tawnies visit mine. A big fat blue tongue as well :-)

You are so lucky to have such an interesting bird in your backyard. Congratulations on a fine series of shots!

The chicks are usually the easiest to spot; they wriggle around quite a bit. Mum and dad can be a bit more difficult. Also knowing where the roost helps, and there's probably a dozen or so spots in my neighbourhood that I know they frequent. That's why I was happy with this spotting. 2 years of no-shows, and I haven't a clue where they were. Not in their usual hiding spots, that's for sure.

Most often when you think there's none around you're standing right next to some.

I'm pretty sure they'd be around, Martin. I have an excellent eye and good ear for frogmouths, but that's taken years of practice. Usually if I can't find them, no one can.

Nice shots Neil.
They are apparently common here too.
I never see them

Thanks very much. I've 'liked' your FB page. Hope you get a good following :-)

What a beautiful shot! Thanks for sharing! Will be sharing with the recently-launched WILD Cities network on facebook today :)

Thanks guys. Ashley, that pose is called "stumping", but it's what I call "doing the stick thing!" In most situations it works pretty well, but one year I had one doing it in the middle of my lawn. The dogs were interested, so I walked straight up to it and picked it up. I don't think they're too bright.

I love that pose they do in the last photo, really is amazing! Great series as usual, Neil :)

Thanks, Joshua, It's not to hard with the young ones, as they're quite animated. The adults just go rigid and do the 'stick thing'!

Thanks everyone. His eyes really bulged when he saw the cats. It was quite funny.

Wonderful spotting and great series. That bird does look astonished!