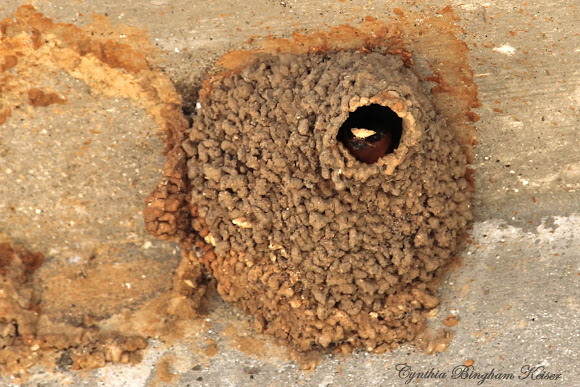 This bird was occupying its nest where the two nest next to it somehow fell. "This bird averages 13 cm (5 inches) long with a tiny bill. The adult Cliff Swallow has an iridescent blue back and crown, brown wings and tail, and buff rump. The nape and forehead are white. The underparts are white except for a red face. The tail is square-ended." - Wikipedia

Under freeway bridge over Lake Hodges.

"American Cliff Swallows breed in large colonies. They build conical mud nests and lay 3-6 eggs. The natural nest sites are on cliffs, preferably beneath overhangs, but as with the Eurasian House Martin, man-made structures are now the principal locations for breeding. Female American Cliff Swallows are known to lay eggs in and move previously laid eggs into the nests of other birds within the colony." - Wikipedia

Really interesting! I've seen lots of swallow nests, but never gotten a photo of one with a bird inside.

My, my...that is really cool...super sighting!