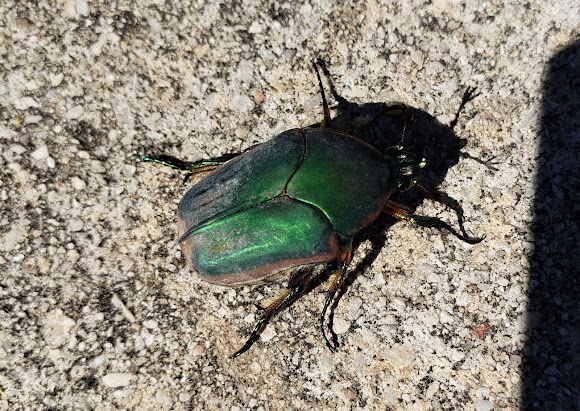 Green beetle with a somewhat glossy covering. Its' legs were iridescent in appearance. It also had a bronze coloring along the edge of its body. Legs appeared to be prickly with some hair.

Larvae is found in compost piles, manure piles, organic mulch and plant roots according to Wikipedia. Adults feed on fruit. They are out during the day, but like shade.

There was some conflicting information that I found on the internet in researching this beetle. Some sites stated that the Green June beetle was the same beetle as the Fig Eater Beetle, and other sites stated that the two beetles were related. All sites I researched did state that this beetle is a member of the scarab beetle family. Some clarification would be great!