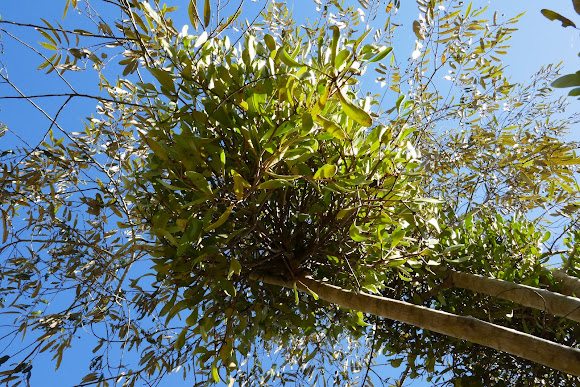 Afro Mistletoe? Not quite, but that's what it looks like to me. This species is also known as Banksia Mistletoe. Mistletoe is a hemiparasitic plant, which means it obtains some nourishment from its host but also photosynthesizes. Also called a semiparasite. This is a native Australian species and has been identified as occurring in D'Aguilar National Park. It's still winter here, so no signs of budding or flowering just yet. Other species also consider for ID are: Amyema conspicua subsp. conspicua, and Amyema congener subsp. rotundifolia. Both also occur in this national park.

Spotted at a clearing at Lake Manchester, a freshwater reservoir west of Brisbane. It is located in Brisbane Forest Park, an area of dense native bushland and subtropical rainforest. Commonly occurs in coastal areas in sclerophyll forest and rainforest, usually parasitic on species of Banksia and Casuarinaceae, but also on various rainforest trees such as Coachwood (Ceratopetalum apetalum). I think this is the species this mistletoe is growing on, but not certain.

89 mistletoe species in 14 genera are recognised in Australia, and are set out in the following link: https://www.anbg.gov.au/mistletoe/taxono... Of these, 66 species (74%) are endemic to Australia. By far the most numerous species belong to the family LORANTHACEAE, commonly known as Showy Mistletoe, but two other recognised families are SANTALACEAE and VISCACEAE. However, these represent only a small proportion of mistletoe species found in this country. Finally, here's some information on the bird that spreads the mistletoe seeds: http://www.birdsinbackyards.net/species/... It's an Australian native bird that ranges across most of the continent, as well as parts of PNG and eastern Indonesia.