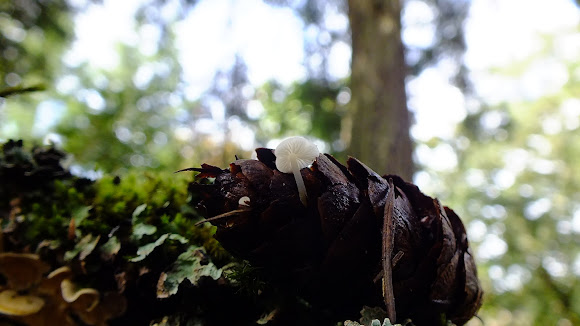 Strobilurus trullisatus is probably the most common cone-dwelling gilled fungus in the Pacific Northwest, overwhelmingly favoring Douglas-fir cones that are fairly well rotted. The fruitbodies often arise from buried cones, so a little excavation may be required to make the substrate apparent. Like other members of the small genus Strobilurus, it forms small, dull-colored, fruitbodies with broadly convex to flat caps, small non-amyloid spores, cap cuticle composed of cell-like hyphae, and no clamp connections. In addition, the cap is whitish, often with pink tones, the gills are closely spaced, and the stipe is thin, grades from whitish at the apex to yellowish to brown in its lower portion, and bears yellow-brown or orangeish wooly hairs at the base.

Solitary to grouped on decaying Douglas fir cones; from late summer in areas of fog drip to mid-winter.