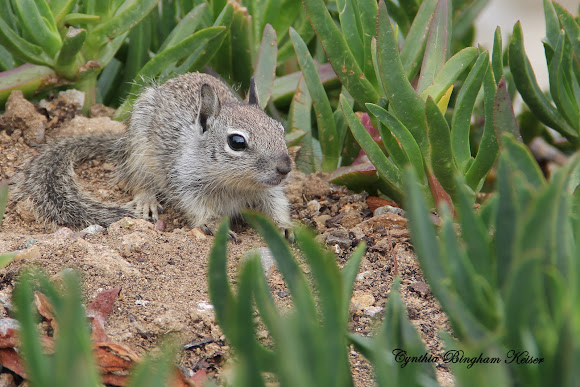 This is a young squirrel that was very cute! The last image is of an adult but I had to post it to show how curious and brave these squirrels are at the beach. "The squirrel's upper parts are mottled, the fur containing a mixture of gray, light brown and dusky hairs; the underside is lighter, buff or grayish yellow. The fur around the eyes is whitish, while that around the ears is black. Head and body are about 30 cm (12 in) long and the tail an additional 15 cm (5.9 in). " - Wikipedia

Cliff side at the beach. It "is a common and easily observed ground squirrel of the western United States and the Baja California peninsula; it is common in Oregon and California and its range has relatively recently extended into Washington and northwestern Nevada." - Wikipedia

"As is typical for ground squirrels, California ground squirrels live in burrows which they excavate themselves. Some burrows are occupied communally but each individual squirrel has its own entrance. Although they readily become tame in areas used by humans, and quickly learn to take food left or offered by picnickers, they spend most of their time within 25 m (82 ft) of their burrow, and rarely go further than 50 m (160 ft) from it." - Wikipedia