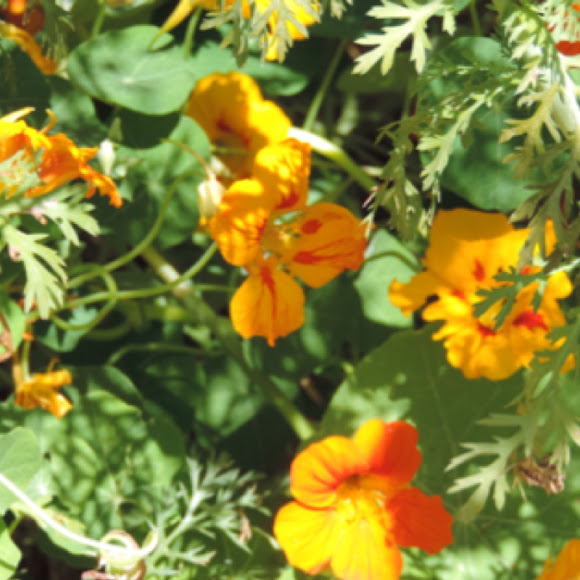 Intensely bright flowers, and rounded, peltate (shield-shaped) leaves with the petiole in the centre. The flowers have five petals (sometimes more), a three-carpelled ovary, and a funnel-shaped nectar tube at the back

They seem to have naturalized in some places along the bluffs overlooking the ocean at La Jolla. They were growing along the trail, as well as climbing up through bushes.

All parts of T. majus are edible. The flower has most often been consumed, making for an especially ornamental salad ingredient; it has a slightly peppery taste reminiscent of watercress, and is also used in stir fry. The flowers contain about 130 milligrams (2.0 gr) vitamin C per 100 grams (3.5 oz), about the same amount as is contained in parsley. The unripe seed pods can be harvested and dropped into spiced vinegar to produce a condiment and garnish, sometimes used in place of capers. Mashua (T. tuberosum) produces an edible underground tuber that is a major food source in parts of the Andes. Nasturtiums have been used in herbal medicine for their antiseptic and expectorant qualities. They are said to be good for a chest cold and to promote well being by the formation of new blood cells. Tropaeolum majus has been used in herbal medicine for respiratory and urinary tract infections.