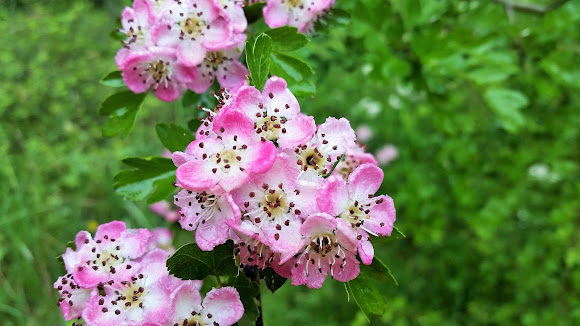 I was surprised to find this hawthorn with pink and white blooms an amazing display of beauty from such an unsuspecting source.

Spotted in a semi-open meadow with several other hawthorns. English hawthorn is carried by birds into forests and open fields where it can form dense, thorny thickets that outcompete native species and make passage of large animals difficult. Somewhat tolerant of shade as well as drought, English hawthorn invades both open fields and woodlands in Washington, Oregon and California. English hawthorn has naturalized on both coasts of North America and in many of the states in central and eastern United States, as well as parts of Australia, New Zealand and South Africa. Although more common west of the Cascades, English hawthorn has spread in eastern Washington as well. English hawthorn is generally a forest understory species in its native range, but in our region its grows well in a wide range of habitats. Riparian areas, abandoned fields and pastures, shrub lands and grasslands, oak woodlands, and other forested habitats are all vulnerable to invasion by English hawthorn.

Several species of hawthorn have been used in traditional medicine. The products used are often derived from C. monogyna, C. laevigata, or related Crataegus species, "collectively known as hawthorn", not necessarily distinguishing between these species.