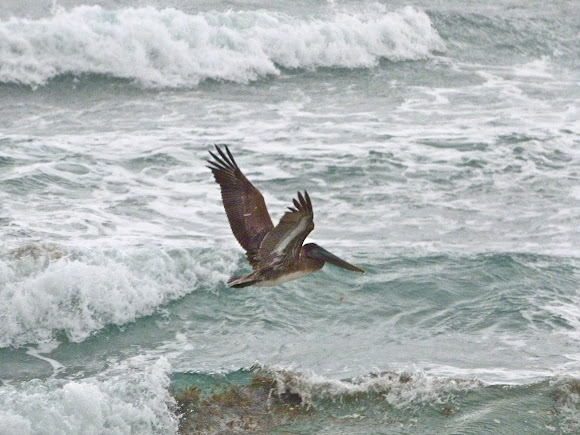 The Brown Pelican is the smallest of the eight species of pelican, although it is a large bird in nearly every other regard. This bird is distinguished from the American White Pelican by its brown body and its habit of diving for fish from the air, as opposed to co-operative fishing from the surface. It eats mainly fish and amphibians as well as crustaceans. Groups of Brown Pelicans often travel in single file, flying low over the water's surface. The nest location varies from a simple scrape on the ground on an island to a bulky stick nest in a low tree. These birds nest in colonies, usually on islands. The anchovy supply is particularly important to the nesting success of the Brown Pelican.

Photographed in the rain so not the best images.

Thanks Carol!
I've been managing to get a few spottings in between the showers!

I know you have had some bad weather! Good going anyway!