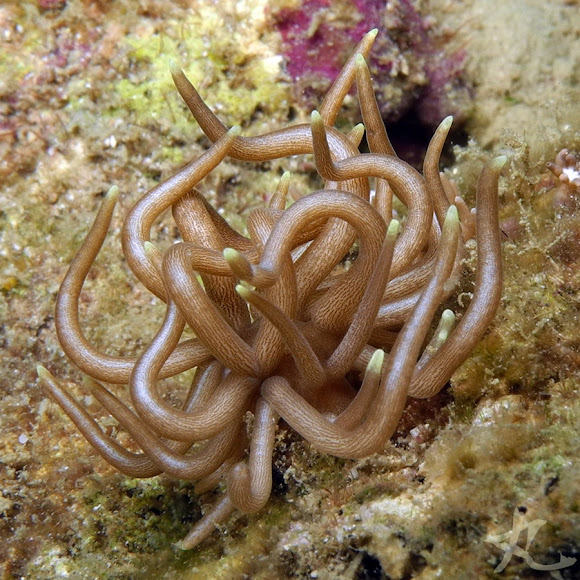 This aeolid nudibranch has a symbiotic relationship with zooxanthellae, one-celled plants that photosynthesize (hence the 'solar-powerd' monicker). It feeds on -- and camouflages with -- the soft coral, Briareum violacea, but also benefits from the zooxanthellate photosynthesis. (On the nudibranch's skin you can see brown flecks, which are the zooxanthellae.) Looking at the nudibranch, it's very difficult to make out which part is the head and which part is the tail. The head can be located by looking for its rhinophores, which appear straighter and shorter than the other "tentacles". Below those is another pair of straight tentacles, which are actually its oral tentacles. The rest, which are usually curved in apearance, are the animal's cerata. All of these yellow-tipped tentacles, as well as its body, are brown in color.

In shallow waters of the Indo-Pacific region (including Australia). This nudibranch needs to keep its resident zooxanthellae alive, hence its existence at depths where the sun's rays can still penetrate.

Spotted this interesting nudibranch at a depth of only 5.8m, off the northeastern coast of Samal Island, Philippines. It measured approximately 2cm long. The first photo is a frontal view of the nudibranch: you'll see two straight tentacles making a "V", those are its rhinophores. The second picture shows it from the right side. The third is a view from the top, showing the animal in a vertical position. The last photo is also a top view but lengthwise or horizontal. Here you can clearly make out the body of the nudibranch, tipped by its rhinophores on the right.

This is truly amazing find Blogie, congratulations and thanks for sharing these information.

What a fantastic spotting!

Video is now up! Sorry, though, because the quality isn't very good.

Thanks, SatyenMehta and everyone who've favorited this spotting!

Thanks Leuba! Yes, very complex indeed, and very difficult to photograph! I spent more than 10mins with this critter, and only towards the end was I able to figure out where its head was! :D

Blogie, fantastic spotting again ! -the information is great too. I would have thought there were two nudibranchs ( pic #2) one on top of the other- it's obviously a very complex-looking creature. Thanks again ! like medusa

was just about to say that Argy :-)
amazing spot !

Am I entertaining you yet, ArgyBee? :D
Video to be posted later...