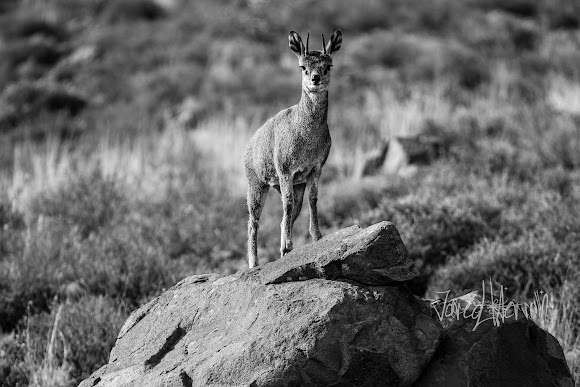 Reaching approximately 58 cm (22 inches) at the shoulder, klipspringers are smaller than most other antelopes. They stand on the tips of their hooves and can fit all four hooves on a piece of cliff the size of a Canadian dollar coin (Loonie), roughly 30 mm in diameter. Male klipspringer horns are usually about 10–15 cm (4–6 inches) long. Female klipspringers in eastern African populations also have horns. With a thick and dense, speckled "salt and pepper" patterned coat of an almost olive shade, klipspringers blend in well with the koppies (rock outcrops) on which they can usually be found. However, their agility on rocks and crags is so extreme that their most dangerous enemies are eagles and humans, so camouflage is not as important to them as to most other antelope

Klipspringers are preyed upon by leopards, caracals, eagles and humans.