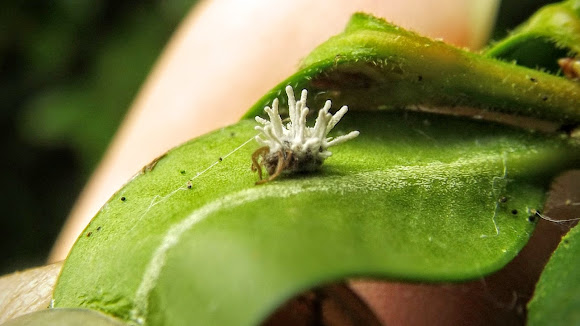 The generic name Cordyceps is derived from the Greek word kordyle, meaning "club", and the Latin stem -ceps, meaning "head". Several species of Cordyceps are considered to be medicinal mushrooms in classical Asian pharmacologies, such as that of traditional Chinese and Tibetan medicines. When a Cordyceps fungus attacks a host, the mycelium invades and eventually replaces the host tissue, while the elongated fruit body (ascocarp) may be cylindrical, branched, or of complex shape. The ascocarp bears many small, flask-shaped perithecia containing asci. These, in turn, contain thread-like ascospores, which usually break into fragments and are presumably infective. Some current and former Cordyceps species are able to affect the behavior of their insect host: Ophiocordyceps unilateralis (formerly Cordyceps unilateralis) causes ants to climb a plant and attach there before they die. This ensures the parasite's environment is at an optimal temperature and humidity, and that maximal distribution of the spores from the fruit body that sprouts out of the dead insect is achieved. Marks have been found on fossilised leaves that suggest this ability to modify the host's behavior evolved more than 48 million years ago.

The genus has a worldwide distribution and most of the approximately 400 species have been described from Asia (notably Nepal, China, Japan, Bhutan, Korea, Vietnam, and Thailand). Cordyceps species are particularly abundant and diverse in humid temperate and tropical forests. Some Cordyceps species are sources of biochemicals with interesting biological and pharmacological properties,[8] like cordycepin; the anamorph of C. subsessilis (Tolypocladium inflatum) was the source of ciclosporin—an immunosuppressive drug helpful in human organ transplants, as it inhibits rejection. Fingolimod, a sphingolipid used to treat Multiple Sclerosis, is modified myriocin which was isolated from Isaria sinclairii, the anamorph stage of Cordyceps sinclairii.

This particular cordyceps sp. was spotted on a host spider on the underside of a maple leaf in fordcombe village cemetery, I was more than excited as had previously heard of parasitic fungi but had never come across it before.

@dandoucette thanks for the info :)

Very cool! Great spotting Janine. I'd say you're right, its been infected with a species of Cordyceps I would say.
https://en.wikipedia.org/wiki/Cordyceps