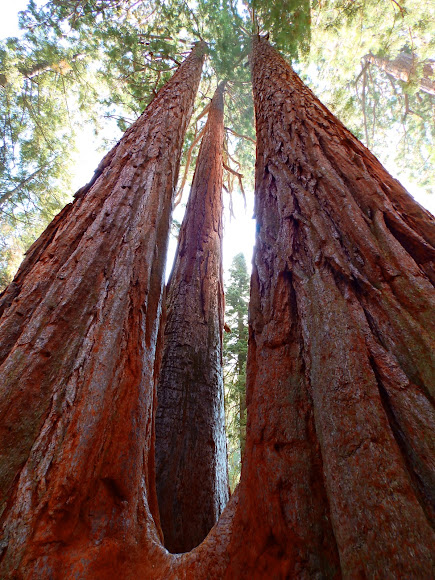 They start as a small rounded bear cone and end up growing up to 85 m tall, 8 m in diameter and can live thousands of years. Fortunately humans soon found out that the bark of sequoias is not good for construction so they stopped logging them. Giant sequoias are in many ways adapted to forest fires. Their bark is unusually fire resistant, and their cones will normally open immediately after a fire.

It occurs naturally only in groves on the western slopes of the Sierra Nevada Mountains of California. These are in Sequoia National Forest, CA.

Beautiful spotting and photos, Marta. My only encounter with this species was at Muir Woods near SFO. I see photos like these and the memories come flooding back.

Congrats! This spotting has been featured as a PN Fact of the Day!

Project Noah Fact of the Day: Giant Sequoias are among the oldest living things on Earth. The oldest known giant sequoia based on ring count is 3,500 years old. Giant sequoias are the world's largest single trees and largest living thing by volume. Giant sequoias grow to an average height of 50–85 m (164–279 ft) and 6–8 m (20–26 ft) in diameter. Record trees have been measured to be 94.8 m (311 ft) in height and over 17 m (56 ft) in diameter. ~Wikipedia