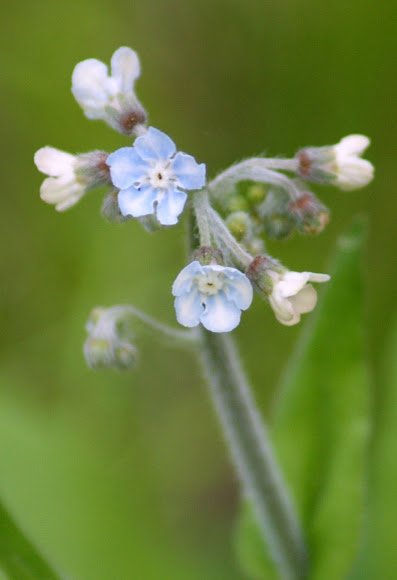 Wild Comfrey is is an erect, unbranched perennial with rough fine hair on its leaves and stem. Their leaves are simple, entire, and have an alternate pattern. The leaves are denser at the lower end of the stem and they get smaller going up the stem. It has two to six racemes. The flowers have five deep lobes that are connected to a superior ovary which in turn is connected to the style. The flowers have rounded, light blue corollas that overlap each other. The corollas alternate with stamen with anthers.It is a member of the Family Boraginaceae (borage or forget-me-not family). It gets its name from the appearance of its leaves that look like the a dog's tongue, which translates to Cynoglossum in Greek.

Studies indicate that some parts of the life cycle of C. virginianum are dependent on humidity, low temperature, and low competition. Therefore, a forest is a good place in which this species can be found. Flowering and seedling require increased light and a richer soil. This one was spotted at the Stevens Creek Heritage Preserve near Clarks Hill (McCormick County), SC.

It is also called blue houndstongue. Herbalists from the nineteenth-century have suggested that C. virginianum may possibly be a replacement or a substitute for Symphytum officinale (also known as Comfrey or Old West Comfrey.) For a long time, C. virginianum has been used to help treat wounds and to flush out any internal digestive disorders and respiratory infections. It also acts as a sedative medication. Because of one of the active substances in the plant, large doses of it should not be taken because it can cause liver problems.