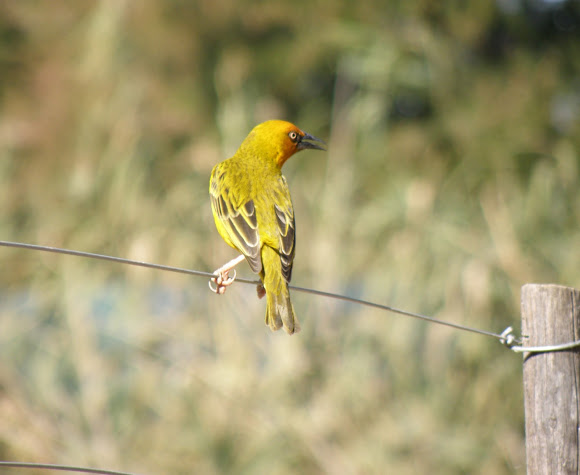 The Cape Weaver is a stocky 17 cm long bird with streaked olive-brown upperparts and a long pointed conical bill. The breeding male has a yellow head and underparts, an orange face, and a white iris. The adult female has an olive-yellow head and breast, shading to pale yellow on the lower belly. Her eyes are brown. Young birds are similar to the female.

The Cape Weaver (Ploceus capensis) is a resident breeding bird species endemic to South Africa. This common species occurs in grassland, agricultural and fynbos habitats, often near rivers. In breeds in noisy colonies in trees (often willows or Eucalyptus, rarely palms) and reedbeds.

This weaver builds a large coarsely woven nest made of grass and leaf strips with a downward facing entrance which is suspended from a branch or reed. The Hadada Ibis will sometimes nest in the weaver colonies. The Cape Weaver feeds on a wide variety of seeds, grain and insects. The calls of this bird include a harsh azwit, azwit.