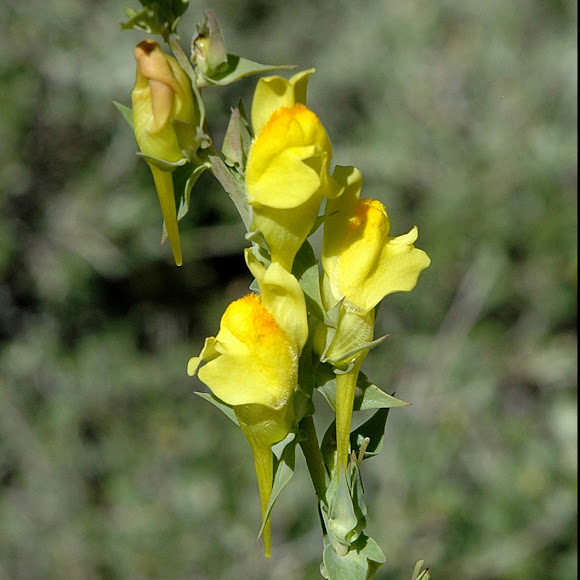 Dalmatian toadflax is a perennial with extensive roots that grows up to 3 feet tall and spreads by seed and lateral roots. The overall form of the plant is narrow and upright, with multiple stems growing from a single woody base. Snapdragon-type flowers are bright yellow tinged with orange and are 1 to 1.5 inches long. Seed pods, flowers and flower buds are often present at the same time. Plants have a long flowering period, generally May to August. Mature plants can produce up to 500,000 seeds and seeds remain viable in the soil for up to 10 years. — Wikipedia

Linaria dalmatica is listed as a noxious weed in 12 U.S. states.[2] It is a grassland invader native to the Mediterranean region, and it was introduced to North America in the late 1800s. It has fast-growing strong, horizontal roots, and can withstand cold, and is a problem for farms and grasslands in the interior of British Columbia.[3] NATIVE TO/ WHEN INTRODUCED: Mediterranean region of Europe, Dalmatian toadflax is currently found in at least 34 states in the U.S. and most of the Canadian provinces. Has significantly reduced livestock production on infested pastures and rangeland. The first records of the species in Washington date back to the 1920s.