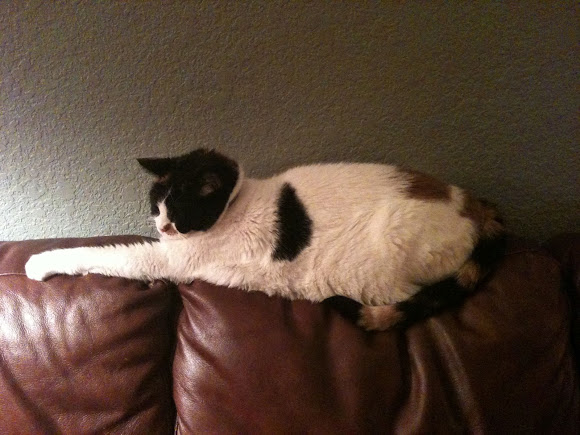 Calico cats, by definition, have patches of orange, white, and black fur. In the calico, these patches are distinct. Tortoise shell cats have the same coloring as calicoes, but their colors blend together. A calico cat must be a tri-color, with its three colors in distinct patches, not mixed as in a tortoiseshell cat. Some breed standards specify what percentage of the body must be white; others allow tabby striping in the color patches. To be a true tri-color, a calico cat's colors must be: white; red or cream; and black, blue, chocolate, lilac, cinnamon, or fawn. The variations in color from red and black are caused by a gene which dilutes, or lightens up the basic color, and produces a dilute calico cat, most commonly with a coat of white, cream, and blue. First for a quick lesson in basic biology: Female cats are formed when each parent donates an X chromosome. Male cats are formed when the mother donates an X chromosome and the father donates a Y chromosome. Part of the genetic anomaly that gives calicoes their unique coloring is linked to the X chromosomes. In calicoes, one X chromosome carries the gene for black fur and the other X chromosome carries the gene for orange fur. Since males only have one X chromosome, they rarely become calico cats. The very few male calicoes usually have genetic abnormalities (such as carrying an XXY chromosome pattern). They are almost always sterile and may experience other health problems as well.

Cats are a cosmopolitan species and are found across much of the world. They are extremely adaptable and are now present on all continents except Antarctica, and on 118 of the 131 main groups of islands – even on sub-Antarctic islands such as the Kerguelen Islands. Feral cats can live in forests, grasslands, tundra, coastal areas, agricultural land, scrublands, urban areas and wetlands. Their habitats even include small oceanic islands with no human inhabitants. This ability to thrive in almost any terrestrial habitat has led to the cat's designation as one of the world's worst invasive species.

Calico is not a breed of cat, but an unusual coloring occurring across many breeds, including Domestic Short-hair, Persian, and Manx.