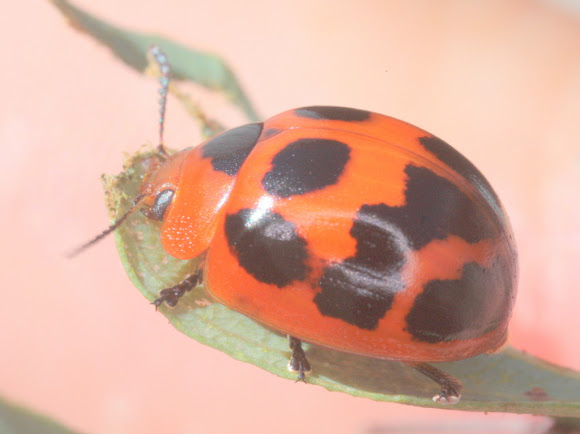 A very bright orange leaf beetle with large black spots would make for a very large ladybird beetle. This nominate species occurs only in PNG and not on Australian lists. Some work to do here, boys...

There are several leaf beetles that mimic ladybird beetles. This specimen was spotted by Christiane and sent to me for some research. Thankyou for your help CG. I still owe you some cookies. :) Beetles are a forgotten group even by entomologists even though they form the largest taxon in the animal kingdom. 350 000 different species make up a huge 40% of all insect species. Leaf beetles (Chrysomelidae) are one of the largest of these groups. They are monophagus and fixed to their food plant. As plants diverge, so do the beetles, driving massive speciation. Leaf beetles, as I have documented are very numerous but many cannot be easily identified and names are undetermined. Birdwatchers and orchid enthusiasts have field guides to easily(?) identify their spottings. Butterfly collectors and dragonfly fans can check literature or online and be assured that their particular find is documented. There is no such online resource for Australian beetle fans. Not yet.

I presume that someone will need to describe this species as an invasive immigrant and after a period of time it gets considered naturalized. No visas needed, just a long wait in the queue.

I am looking forward to more information.. :)