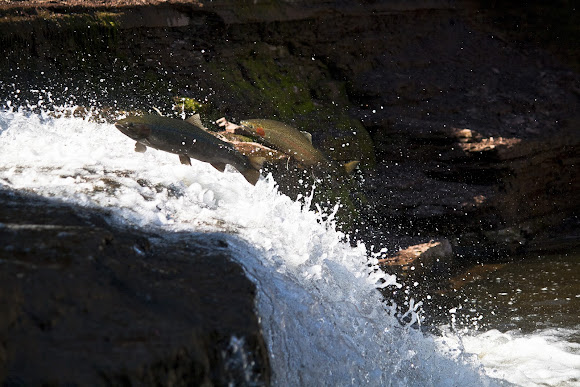 This is a series I took early this spring in March, as the Rainbow trout were running upstream to spawn. They reach a dead end at the Waterport Falls which is a very steep stepped cascade that is impassable by any but the most experienced rock climbers. The fish congregate in the pool below the falls making attempt after attempt to get to the top, their instinct so strong that they end up wearing themselves out, from battering themselves against the rock ledge at the bottom of the falls. They often spawn in the pool before either being caught by birds, fishermen, raccoon, or just succumbing to exhaustion at the end of their quest to breed. I hope everyone enjoys this series as much as I did taking capturing them!

http://en.wikipedia.org/wiki/Rainbow_tro... These are normally lake trout that migrate upstream through the various waterways that empty into Lake Ontario.

Thank you Ava! Patience really is a virtue in this hobby/sport/addiction!

Wonderful series; your wait and work paid off.

Thank you ArgyBee! I sat for hours and shot hundreds of frames in order to get just a handful of decent photos! LOL I was called crazy by almost everyone that came down to go fishing, as I would be there long before they would arrive and still be sitting there as they were leaving.