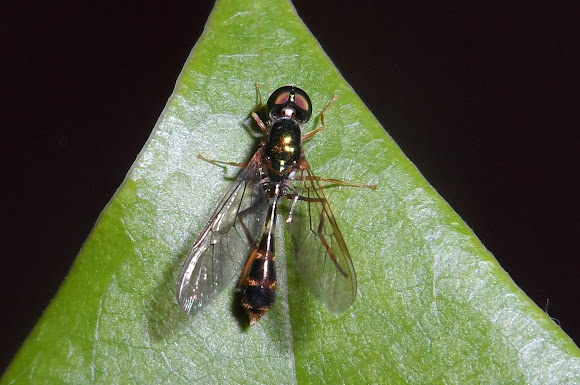 The soldier flies, are a family of flies (historically placed in the now-obsolete group Orthorrhapha). The family contains about 1,500 species in about 400 genera worldwide. Adults are found near larval habitats. Larvae can be found in a diverse array of situations mostly in wetlands and damp places in soil, sod, under bark, and in animal excrement and decaying organic matter. They are diverse in size and shape, though they commonly are partly or wholly metallic green, or somewhat wasplike mimics, marked with black and yellow or green and sometimes metallic. They are often rather inactive flies which typically rest with their wings placed one above the other over the abdomen. Very small to large (3–20 mm long); 3 segmented antennae with the terminal segment annulated; ocelli present; lower orbital bristles absent. post-vertical orbital bristles absent; vibrissae absent; mouthparts - proboscis short, not piercing, maxillary palps 1 or 2 segmented; wings with a small discal cell or discal cell absent, nosub-apical cell, closed anal cell, costa not extending around the entire wing, sub-costa reaching the costa independently of vein 1, or joining vein 1 close to where it joins the costa; the leading edge veins often markedly stronger than the rest; vein 6 present and reaching the wing margin. Vein 7 present not reaching. Tibiae without spurs.